To set the stage:

About thirty minutes ago I went downstairs to make me an evening snack, when I noticed a cute little bunny rabbit sitting with its back to my french doors in the middle of my (very) weedy flower bed. I’ve seen rabbits in my front and backyard before, but never had such an opportunity to photograph one as I did tonight. So I quickly ran upstairs, grabbed the digital camera, and ran back down the stairs to try and take a quick pic. By the time I opened the door, the bunny had dashed off of the flower bed and into the yard. I tried to snap a couple of photos, but – as my luck would have it – the battery to the digi was almost dead. So I ran upstairs again, recharged the battery for about sixty seconds (long enough to take another couple of pix) and then ran back down to see if the rabbit was still there. Luckily it was. So I took another pic before it ran off down the back of my building – and to my surprise there was another bunny … maybe the mother, because she was older and bigger. So I got took one more photo and hoped in the meantime that the flash I used on the camera didn’t blind them (it was close to dark outside so I had no choice).

I made my snack, then came back upstairs to check out how the pix turned out. As you’ll see from the below shot (which is the best of ’em) they didn’t turn out very good: 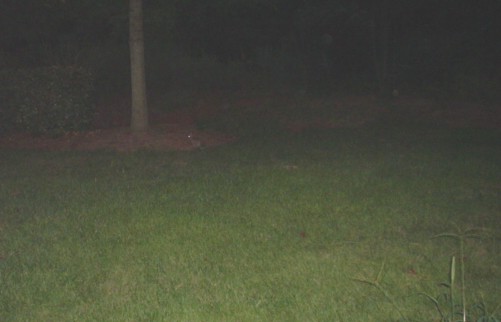 I tried to lighten it up some, because even with the flash it was still dark back there – if you look closely to the right of the tree trunk, you’ll see a bright dot; that’s the flash shining off the lil guy’s eye. The one pic I took of mama bunny and baby bunny have little dots in the pic even smaller than that one.

I know – it’s not a great photo, but I have one that I think will compensate for it: 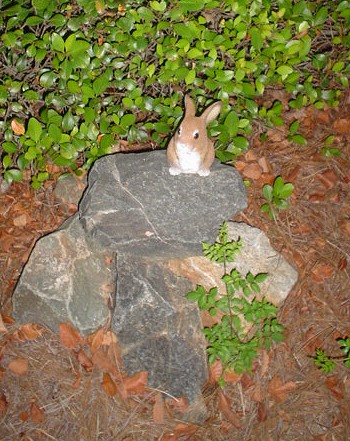 Ok – yes, it is indeed a faux bunny: it’s the one I have in my front yard. I swear it does not look that fake in natural lighting …