***This post will be updated throughout the night. Newest updates will appear at the top of the post****

Update 11 – 10:03 PM: The DNC video of Obama is playing. Obama should be out in a few minutes. His speech is estimated to last for about 50 minutes, including the applause. I had a chance to read the transcript. He’s taken the gloves off now. Senator McCain needs to raise the roof next week.

Update 10 – 9:58 PM: Illinois senior Senator Dick Durbin is intro’ing Obama. Obama will take the stage around 10:15. NBC is the first of the “big three” nets to cut to Invesco Field. I suspect ABC and CBS will join at 10. Michelle Obama has joined Biden and his wife in the audience. 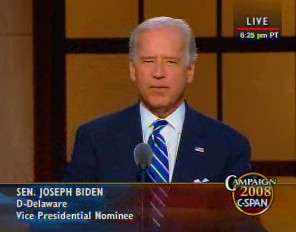 Michael Steele’s on Fox and is talking about how the Democrats have to falsely paint America as in dire straits (awful economy, failure in Iraq, etc) in order to try and win the election. Ain’t that the truth?

Update 7 – 9:20 PM: Ah, ya gotta love the pundits on all the major ‘nets tonight. This, my dear readers, is a poljunkies favorite time of the year. I admit I’m a bit giddy myself

Here’s a view from CNN’s Skycam: 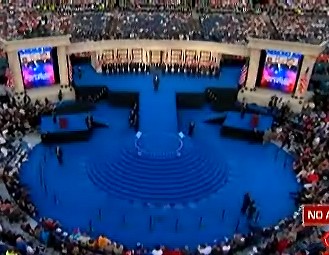 Update 6 – 9:06 PM: About an hour to go before Barry Oh’s big speech. Here’s an alternate live feed link in case C-SPAN’s has gotten slow (it has for me) 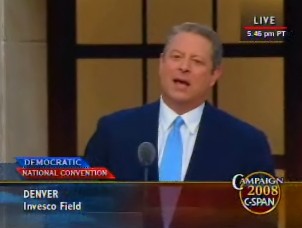 And the lies commence. The planet is doomed unless we do something NOW!!!!!!! 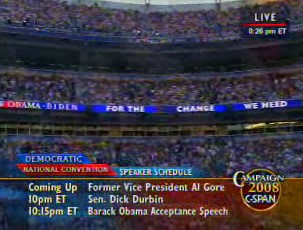 Stevie Wonder is on stage getting ready to sing a song called “Fear Can’t Put Your Dreams To Sleep.”

Update 2 – 8:19 PM: At roughly 8:30, The Goracle will blow hot air onto the convention floor with his speech. Make sure to keep the handy dandy schedule close by to know who is going to be up after who.

Update 1 – 7:46 PM: Check out this citizen journal live feed of the line to get in at Invesco Field. Wow. Make sure to click on other People’s Press Collective links here to to get a birdseye view of inside and outside the stadium. Excellent stuff. (via MM)

Ok peeps, we’re all set. Tonight’s the night – day 4, the final day of the DNC and the night Barack Obama will descend from the clouds above and make his acceptance speech for the Democratic party nomination for president. CNN has posted excerpts from the speech. Here is tonight’s schedule of events. Academy award-winning singer Jennifer Hudson sang the National Anthem moments ago. She’s also a former American Idol contestant, which I should say is rather befitting considering the rock star status of the man who will appear on stage sometime after 10 Eastern Time. As always, if you can’t get to a TV but do have I’net access, you can watch things as they happen on C-SPAN.

—– First things first, let me get this out of the way: Clearly, I have my political differences with Senator Obama, but I’d like to congratulate him on winning the Dem nomination, as well as note the historic significance of his nomination. I’m fine with a candidate making history – I would just prefer it to be the right candidate. I don’t believe Obama is that candidate, but nevertheless I will give credit where it is due. Congratulations, Senator. I have also said a silent prayer in hopes that tonight there will be no security issues. That’s an awfully big stadium, and the Secret Service definitely has their work cut out for them.

—– Along those same lines, the big ad the McCain campaign promised tonight has been released to the media for airing already, and it’s not an attack ad but instead congratulatory:

—– Fox and other news outlets are reporting how the McCain campaign is desperately trying to keep the news of who he has picked for his veep running mate from being leaked to the press. In spite of reports suggesting that the Team McCain might try and make the announcement tonight in an effort to steal some of Obamacus’s thunder (pun intended), it doesn’t appear they are going to do that. I think they’ve realized that it would look too much like they were trying to undercut Obama on a night that should be his – not only that, but the announcement would get lost in all the frenzy surrounding Obama’s acceptance speech. Tomorrow (in Dayton, OH) is a much better day for trying to blunt some of the momentum.

—– Supposedly, when McCain takes the stage tomorrow in Dayton, OH he will have the top contenders for the veep slot with him – Romney, Pawlenty, etc – so as to keep the suspense going til the last possible minute.

—– The Democrats can finally cheer about poll numbers this week: Gallup’s daily polling shows that Obama has rec’d a bounce from the convention, as he is now up 48-42% over McCain. I suspect the numbers will tighten up in the coming days – or perhaps will show Mc in the lead – after we learn more about McCain’s nominee and hear his acceptance speech next week.

—– Not to rain on a parade, but not only did MLK make his famous “I Have a Dream” speech 45 years ago today, but today is also another anniversary, one that is not so touching:

It was forty years ago today that Barack Obama friend and political ally, and unrepentant terrorists, William Ayers was arrested while protesting the DNC proceedings. William Ayers set no bombs that day, but he was only working his way up from petty criminal to domestic terrorist.

—– Raw Story is trying to generate a controversy over a McCain ad that will remind everyone of the RNC’s “RATS” ad controversy from 2000:

A McCain ad aired on Fox News channel with the words “HANG” in the background along with a photograph of Barack Obama has sparked outrage after being noticed by a reporter at a local Fox television affiliate.

The words “HIGHER TAXES” are transposed on an image of Obama standing in front of a crowd. The background is blurred at the edges so that the words from Obama’s signature theme — change — has been cut down to the word “HANG.” The shot appears for about a second.

Strikingly, the image of Obama with the word hang in the background is blurred far more heavily on the side where the C would have been, suggesting the decision was intentional. The company that produced the ad refused to comment when the local Fox affiliate inquired.

Sigh. I guess if you look hard enough, you can see anything you want to. Here’s the ad.

—– As Tropical Storm Gustav gains strength and blazes a path, possibly towards New Orleans, it could change the GOP convention scheduling. Fox News has the full story.

—- Stuck On Stupid Democrat Jimmy Carter was quoted by the USA Today as saying that McCain is “milking” his POW days. Will we see Barack Obama and/or his campaign sharply condemning this line of attack? Don’t count on it. As we learned early on this year, Barack Obama is plenty fine having his surrogates do his dirty work.

Time to go get changed for the toga party. More updates to come later … 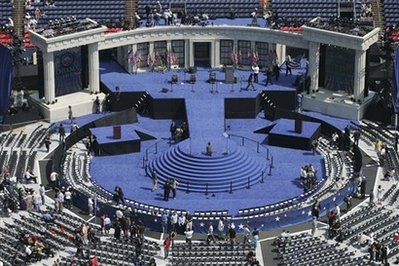