Last night, America returned to Mars with the successful landing of the rover “Curiosity” in the Gale Crater region of the Red Planet. While there’s been no sighting of lost cities, canals, or Thuvia (yet), we do have this amazing image: 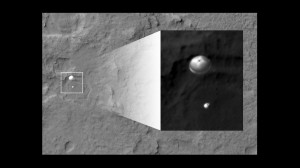 That is Curiosity about six minutes into its seven-minute descent to the Martian surface. The larger upper portion is the parachute, while the lander itself is the lower dot. The photo was shot by the Mars Reconnaissance Orbiter, from more than 200 miles away. There’s video of the related news conference here.

After all that’s gone wrong the last few years, it’s a nice reminder of the amazing things we’re capable of. That, ladies and gentlemen, is a snapshot of one American space vehicle taken by another American spaceship — around an alien world hundred of millions of miles away.

How cool is that?

Seriously, I want an art print of this.

EDIT: In my excitement, I was sloppy with the information: Curiosity’s route covered 350 million miles. Mars is closer than that in a straight line. I blame geeky excitement, and thanks to Mike in the ST comments.