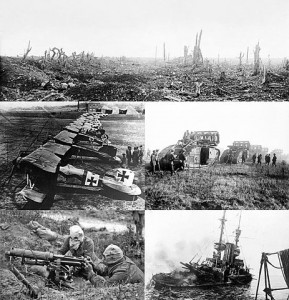 There’s an excellent (1) article by Victor Davis Hanson (2) on the lessons to be drawn from World War I, or, as I sometimes call it, the 19th century’s collective act of mass suicide (3). As this is the centennial year of the war’s start, we’re naturally seeing and will see all sort of books, articles, and programs about how it happened, whose fault it was, and what we can learn from it.

Hanson’s article deals with the last. After reviewing the standard analyses regarding secret treaties, rigid mobilization plans, and a too-harsh peace, all of which have their flaws, he keys on one that has bearing for our increasingly dangerous world, today — misjudgment:

One of the lessons of the outbreak of World War I is the importance of perceptions. At some point in 1914 the German military and diplomatic community concluded that the country not only could pull off a successful lightning strike against France, but could do so without starting a world war — given various events over the prior decades.

Such flawed thinking is a good reminder that appearances often matter as much as reality in provoking wars. Hitler certainly was suicidal in attacking his de facto partner, the Soviet Union, in June 1941. But for all his crazy ranting about his grievances, Untermenschen, and grand strategy, it was the false perception that the Soviet Union would quickly collapse — given its recent dismal performance in Poland and Finland, and the prior purging of its officer corps, contrasted with the recently successful Blitzkrieg in Poland and Western Europe — that persuaded Hitler to try something so fatally dangerous.

And yet, at the end of both wars, Germany was defeated –crushed, in the latter case– by the nations her leaders has mistakenly deemed weak. War had assumed its role as the final arbiter of the realities of power, at the price of wholesale destruction and millions dead.

For which Hanson sees a rough parallel and lesson for today:

China, like the Westernized Japan of the 1930s, wants influence and power commensurate with its economic clout, and perhaps believes its growing military can obtain both at the expense of its democratic neighbors without starting a wider war. North Korea is not convinced that demanding concessions from South Korea — or simply humiliating it and the U.S. — by threats of war would not work. Iran trusts that the age of the U.S. mare nostrum in the Mediterranean is over, that the Sunni Persian Gulf oil sheikdoms are spent, that once-unquestioned Western guarantees to Israel are now negotiable, that nuclear acquisition is an agreed wink-and-nod obtainable enterprise, and that terrorist appendages can achieve political objectives in the Middle East just as effectively as carrier groups.

Putin dreams that the Russian imperial world of the 1950s can live again, through coercion, Machiavellian diplomacy, and the combined lethargy of the EU and the U.S. — and he often is willing to take some risks to refashion current realities. Failed socialist and Communist states in Latin America nonetheless believe that a distracted or uninterested U.S. no longer cares to make the argument that transparent democratic capitalism is the region’s only hope for the future. The miseries of Bolivia, Cuba, Ecuador, Nicaragua, and Venezuela are apparently no reason for them to feel that they should not extend them to other countries.

And then ties it to our current leadership:

Amid all that, a minor bow and apology here, or an inadvertent pink line and empty deadline there, matters. Gratuitous talk of “reset” and “lead from behind,” coupled with serial scapegoating of past U.S. policies and presidents, massive new debt and vast cuts in defense, also sends a message to our rivals and enemies that occasional gambles and aggressive moves that would usually be seen as stupid and suicidal may not be any more.

World War I became “World War I” when Germany believed that Britain would not fight to support France or honor an ancient treaty with little Belgium. They were wrong, but part of the reason they were wrong was due to the diffident mixed signals being sent by London. The world now has to hope that the diffidence emanating from Washington doesn’t lead to similar misjudgments in Moscow, Beijing, or Tehran.

Footnote:
(1) Kind of a needless adjective, when talking about anything written by VDH.
(2) Why isn’t this man in the Senate, instead of the blithering idiot Boxer? I demand satisfaction!
(3) Update: I should have made this clear, I guess, but, no, I do not believe the First World War was fought in the 19th century. As I explained to a commenter, WWI and the “suicide of the 19th century” refers to the civilization of the “long 19th century,” a term some historians use for political, diplomatic, and cultural themes that were dominant from roughly 1789 to 1914. The chronological 19th century ended at midnight, December 31st, 1900. The world of the 19th century came to an end in August, 1914.

5 Responses to "Lessons of World War I. @BarackObama, take note"