Moral Monday, led by NC’s version of the Rev. Al Sharpton – NC NAACP President Bill Barber – has cranked back up again and it looks like they’re still trying to confuse the heck out of everyone with mixed signals when it comes to whether or not they want religion to play a role in government policy. .....   [Read More] 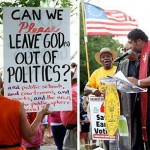 I’ve written here and at Storify numerous times as to how far the left this state’s Democrats are going, a disturbing situation that has escalated since the party has effectively been out of power statewide since 2010.  First, the GOP took control of the North Carolina General Assembly (NCGA) for the first time in over a century in 2010, and then in 2012 we saw Pat McCrory (R) elected Governor and Dan Forrest elected Lt. Governor (R), with the GOP increasing their majorities in the state House and Senate (NCGA).  As you can imagine, that loss of power was not taken well at ALL by the state’s leftists – in particular it’s Raleigh-area-based think tanks better known as Blueprint NC, who soon devised what’s known around here as a “by any means necessary”  playbook of trying to snag back control of state government from Republicans.   They called for a “crippling” of state government just a month into Pat McCrory’s term.  These despicable tactics pushed for by the various think tanks that make up Blueprint NC have been used by elected Democrats in our state legislature (NCGA) even though technically by law that would violate the tax exempt status of Blueprint NC, a so-called “non-partisan” advocacy group.  They don’t see that as the case, and no one has pushed the issue but for now, the beat with them goes on......   [Read More]

Raleigh news channel WRAL continues in its quest to “prove” that most participants in the left wing “Moral Mondays” protests are from North Carolina. This is a probability no one disputes but WRAL and other Raleigh-area media outlets continue to construct a false narrative (and then argue against it) about what the state GOP and its allies are saying about the protesters.    Reporter Mark Binker writes: (bolded emphasis added by me):.....   [Read More]

The steamed, er, esteemed Rev. William Barber (D-NC NAACP) officially kicked off “Moral Mondays” on April 29th, and as we get ready to head into our 7th Moral Monday march (there was no protest on May 27 due to the Memorial Day holiday) now is as good a time as any to provide a primer of sorts on how Moral Mondays are being reported on by what some have for years called our “state-run media.” However, since the state is now firmly in the hands of the Republican Party, it can’t really credibly be called “state-run media” anymore so for purposes of discussion we’ll just call it our left leaning NC mainstream media.  Specifically, the area conservatives look at as the base for Democrat-flavored news is Raleigh and surrounding/nearby cities like Durham, Chapel Hill, and Greensboro......   [Read More]