Of course, I’m referring to none other than impeached former president Bill Clinton. 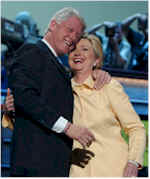 Earlier this week, I blogged about candidates Clinton’s and Obama’s upcoming visits to Selma, AL this weekend, just yards away from each other, at various events commemorating the plight of black people during the civil rights movement and noted that the Slickster, who we also know as America’s first black president, would not be on hand to accept an award Selma was presenting to Senator Clinton on his behalf. I also speculated in that post as to why Bubba – at that time – was not scheduled to be at the ceremony.

Well, today we learn that He Who Democrats – Especially Black Democrats – Believe Walks On Water has “rearranged” his schedule to be there:

WASHINGTON — White House rivals Barack Obama and Hillary Rodham Clinton will be in Selma, Ala., on Sunday to mark the anniversary of a bloody civil rights struggle — with a surprise addition, former President Bill Clinton, nicknamed the first black president.

This will mark Bill Clinton’s first public appearance to bolster his wife’s 2008 bid and comes as she and Obama are competing for African-American votes. The former president will be inducted into the Voting Rights Hall of Fame — the game plan floated earlier had the New York senator picking up the honor for him.

Clinton spokesman Phil Singer said the last-minute addition came as the ex-president was “rearranging his schedule to be there” because it was “an event he did not want to miss.”