**4:35 PM – Due to the length of this post, I have started a new one here which will focus primarily on the SC primary.** I will be on BlogTalk Radio tonight with Rick Moran at 8PM ET to discuss today’s primary/caucus results.**

Today’s the big day in both South Carolina and Nevada for voters in each state to go out and vote for the candidate they feel should have the right to represent their party in the general elections.

The Nevada Republican party caucus starts at 9 a.m. PT. The Nevada Democratic party caucus starts at 11 a.m. PT and lasts for two hours. The polls for the Republican primary in SC are already open, with a low turnout anticipated due to wintry weather (up to 3 inches of snow is expected to blanket the state) and what “some” say are “lackluster” candidates. Here’s what it looked like in Greenville, SC late last night (courtesy WSPA): 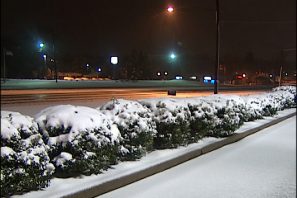 Polls close at 7. There is no Dem primary in SC today – theirs’ is next Saturday, and Barack Obama is poised to take that state.

The Charleston Post and Courier reports on the delegate count at stake for Republicans in SC:

If the state gets to keep all of its 47 delegates, then 29 delegates go to the top vote-getter statewide and three delegates each to winners in the six congressional districts.

If the state’s penalty remains, then 12 of its delegates will go to the statewide winner and two delegates each to winners in the six congressional districts.

That’s 24 delegates total which are up for grabs in today’s SC primary.

In NV, there are 34 delegates at stake for Republicans, and 33 for Democrats.

Final polls going into today’s primary in SC show McCain with a slight lead over Huckabee. I predict a McCain win today in SC by a couple of percentage points. Palmetto Scoop is also predicting a McCain win. Rick Moran has McCain winning in SC and Hillary winning in NV.

Going into today’s NV caucus, Hillary Clinton is leading over Barack Obama in the polling there by an average of about 4 points, and it will be interesting to see if the stunt the Clinton campaign pulled earlier this week by trying to disenfranchise voters will have any effect on the outcome. That race is too close to call for me to predict a winner, but with the stunt Hillary pulled, the O-man might just be the victor today in NV.

Mitt Romney, who has been the only Republican candidate to campaign in NV for any length of time (and who gave up on SC earlier this week), has a comfortable lead in the polls there and is expected to win.

Update 1 – 9:59 AM – (NV): Nevada resident and ST reader Tango reports that weather shouldn’t be a factor today in NV’s caucuses. Here’s what it looks like right now.

Update 2 – 10:04 AM – (NV): The Clinton campaign is accusing the Culinary Workers Union, which endorsed Barack Obama earlier this month, of voter intimidation (via Instapundit).

Barack Obama is still under fire from Hillary Clinton and John Edwards for his praise of Reagan earlier this week (h/t: Memeorandum). MM points out their hypocrisy on criticizing Obama here.

Update 3 – 10:21 AM – (SC): WPDE News Channel 15 is reporting some problems with polling locations in Horry County.

Update 4 – 10:31 AM – (NV): Reno’s KOLO 8 News Channel has a story up today which talks about allegations from the Ron Paul camp that there are “inconsistencies in the Nevada Caucus process,” so much so that he is requesting the caucus be postponed.

Update 5 – 10:56 AM – (SC): Bookmark this link as it will be one place you can find the results from the SC primary after 7pm. The SC Hotline site has tons of links to news stories related to the primary race and the candidates.

Check out these skycams of cities in SC, and what the weather looks like there.

Among Republicans, he ties McCain with 22 percent. McCain is way ahead in independents.

A finish like that – behind McCain with 26 percent and Huckabee with 36 percent, but beating Romney by 9, would be plenty reason to stay in the race.

Will that carry over to today’s SC primary? Stay tuned …

Meanwhile, Zogby polling has McCain and Huck in a statistical dead heat, and Thompson polling in 4th.

— Thanks for the link, Glenn!

Update 8 – 12:56 PM – (NV): Ben Smith at The Politico reports that Bubba is claiming that both he and daughter Chelsea personally witnessed voter suppression by the Culinary Workers Union:

Bill Clinton, speaking at a Vegas YMCA last night, made more charges against Obama and claimed to have, with Chelsea, personally witnessed voter suppression by the Culinary Workers:

Today when my daughter and I were wandering through the hotel, and all these culinary workers were mobbing us telling us they didn’t care what the union told them to do, they were gonna caucus for Hillary.

There was a representative of the organization following along behind us going up to everybody who said that, saying ‘if you’re not gonna vote for our guy were gonna give you a schedule tomorrow so you can’t be there.’ So, is this the new politics? I haven’t seen anything like that in America in 35 years. So I will say it again â€“ they think they’re better than you.”

(The transcript was provided by one source with a recording of the event, and confirmed by another.)

Truth? Or just a typical Dem tactic of claiming suppression/fraud in advance of an election in an effort to cast doubt over the results in the event that they lose?

Update 8 – 1:10 PM – (NV): With the NV Republican caucus underway as of noon ET, CBS is already calling it for Romney, as is NBC and the AP, based on entrance polling. They aren’t exactly going out on a limb, because – as noted earlier – he’s had a comfortable lead there in the polls for a while now.

Unless something unexpected develops in the NV GOP caucus, from here on out I am going to focus on the SC primary and Dem NV caucus, which gets underway at 2:30 ET.

**Advanced notice: I will be on BlogTalk Radio tonight with Right Wing Nuthouse’s Rick Moran to discuss today’s primary/caucus results. Here’s the link you can use to listen.**

Voters who normally vote at the High Point, Craytonville, and Rock Springs precincts will cast their ballots at Belton-Honea Path High School.

Update 10 – 1:40 PM – (NV): The AP reports that “Caucus-goers in Nevada said the economy and illegal immigration were their top concerns, according to preliminary results from surveys of voters entering their caucuses. Romney, the former Massachusetts governor, was leader among voters who cited both issues.”

The economy was one of the factors cited for Romney’s win in MI, too. Interesting …

Update 11 – 1:43 PM – (NV): Bookmark this link to see the results as they come in in NV for both the Dem and GOP caucuses respectively. I’m sure the Vegas Sun will have results posted as they come in as well.

Fox5Vegas has an update page too on the Dem caucus and Republican caucus. Not sure if any of these auto-refresh.

As always, Memeorandum has a good link round up of stories on today’s races.

Update 13 – 2:36 PM – (SC): CNN is reporting that voter turnout has been low today in SC. Probably a lot of it is weather related.

And speaking of, it is snowing in Charlotte, NC now.

Update 21 – 4:13 PM – (SC): The Palmetto Scoop has more on the problems with the voting machines, problems that reportedly had voters being turned away “in droves” along the strand.

Update 23 – 4:29 PM: Since this post is so long, I am going to start a new post which will focus primarily on SC, and will add any interesting info I come across related to the NV Dem caucus. Here’s the new link.