The NYPost writes today about the removal of what’s been called the 9/11 “Survivors’ Stairway” from Ground Zero, which took place yesterday:

And now, the Survivors’ Stairway is on its way to becoming a permanent part of the memorial at the World Trade Center site.

The 37-step staircase, which was delicately transferred to a temporary home on Vesey Street yesterday, was used by thousands of fleeing workers on Sept. 11, 2001. It was the only structure left intact after the Twin Towers collapsed.

While no one will ever climb the 65-ton, two-story structure again, the stairway will go on permanent display at the city’s 9/11 memorial museum on the 10th anniversary of the horrendous attacks.

“It was the only way out,” said Tom Canavan, 48, a former banker who lost his fingernails and suffered burns during a desperate battle to reach the stairs. “It is just a stairway, but it means something. Hundreds if not thousands of people were ahead of me.”

Some 9-11 survivors and family members of 9-11 victims were on hand for the ceremony.

Here are a couple of photos of the stairway, one taken on February 29, just prior to the start of the removal (which took place over a period of several days) and one taken a few days later (h/t: ST reader and NYC resident Leslie). Here’s an undated, top side photo of the stairway.

The below photo is one taken by Chip East for Reuters, and shows a worker putting a flag on the stairway before its removal on Sunday: 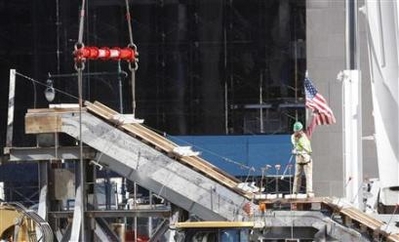 Hundreds were saved thanks, in part, to that stairway. Thousands more, like Peter Edward Mardikian, unfortunately were not. Please continue to remember the victims and their families today and everyday in your thoughts and prayers. They need to know that we will never forget.