Trying to help him out with working class white voters, perhaps? The AP reports (via Memeo):

Democrat John Edwards is endorsing former rival Barack Obama, fresh signs of the party establishment embracing the likely nominee even as Hillary Rodham Clinton refuses to give up her long-shot candidacy.

Edwards was to appear with Obama in Grand Rapids, Mich., as Obama campaigns in a critical general election battleground state.

The endorsement comes the day after Clinton defeated Obama by more than 2-to-1 in West Virginia. The loss highlighted Obama’s work to win over the “Hillary Democrats” — white, working-class voters who also supported Edwards in large numbers before he exited the race.

Edwards, a former North Carolina senator and the 2004 vice presidential nominee, dropped out of the race in late January.

Both Obama and Clinton immediately asked Edwards for his endorsement, but he stayed mum for more than four months. A person close to Edwards, speaking on condition of anonymity, said he wanted to get involved now to begin unifying the party. Obama also signed on to Edwards’ poverty initiative, which was a major cause for Edwards in his campaign and since he left.

The article went on to say that Elizabeth Edwards “is not part of the endorsement.”

No word on whether or not Obama called the hair-obsessed Edwards “sweetie” as he did a female reporter while touring the Chrysler plant in Detroit today. Video below:

As Ben Smith notes, this isn’t the first time Obama’s called a female “sweetie” while on the campaign trail.

Gentleman blogger Bob Owens explains to the Barack Obamas of the world when it’s right to call a gal “sweetie” and when it’s not:

I don’t object to the word “Sweetie”… when addressing a female child, or as a term of endearment with a relative or close friend. Using it condescendingly here as Obama did here in addressing a grown, professional woman is demeaning, and the reporter he called “Sweetie” is obviously steamed at the dismissive slight.

I don’t have a problem with a man calling me sweetie as long as he knows me and we’re on good terms. If I’ve just met you or haven’t known you for very long and you call me sweetie, I turn cool very quickly. This is especially true if a woman younger than me who I don’t know very well addresses me as “sweetie.” Exception to the rule: Women who are older than me (especially women from the south) generally use it as a term of endearment, and even if they don’t know me I’m ok with them using it.

It’s been my experience that women who are younger than me who use it have done so in a tone tinged with condescension and feigned superiority. For me, when I hear it from them, it’s like listening to someone dragging their fingernails across a chalkboard. Grrr.

As far as Barry O.’s “sweetie” remarks are concerned, they’re no big deal in the scheme of things as far as I’m concerned (female Hillary supporters, on the other hand, believe otherwise), but if he gets elected president he better watch who he calls sweetie – the first time it happens when he’s in the middle of a Q&A with the White House press corps in the Rose Garden, he’ll learn … if he hasn’t already after today.

On a related note, the Bush-hating, Chavez-supporting, Kucinich-endorsing actor Sean Penn weighed in today on Barack Obama while at the Cannes Film Festival:

“I don’t have a candidate I’m supporting and I’m certainly interested and excited by the hope that Barack Obama is inspiring” he said, but went on to accuse him of a “phenomenally inhuman and unconstitutional” voting record.

“I hope that he will understand, if he is the nominee, the degree of disillusionment that will happen if he doesn’t become a greater man than he will ever be” Penn said. “This is the most important election, certainly in my lifetime, and maybe ever.” 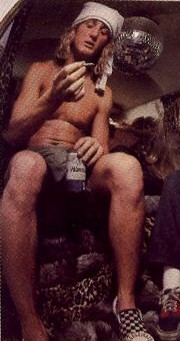 “Hey, man! Like, I find Barack Obama inspiring, even though I think the dude has, like, a phenomenally inhuman and unconstitutional voting record. Huhuh! Oh yeah – let’s party!”

Here’s the voice mail he left for the reporter.

Still no apologies, though, for blatantly misrepresenting McCain’s 100 years war comments and also the Mc’s remarks on the economy …