U.S. Sen. Edward Kennedy, a leading Democrat, was rushed to the hospital Saturday, according to multiple media reports.

CNN said Kennedy had the symptoms of a stroke, according to Reuters, but local affiliate WHDH said his illness was not disclosed.

Kennedy, 76, was taken to the hospital by medical air transport. Kennedy is the senate’s second senior member.

Although I have a strong dislike of Kennedy, I certainly don’t wish anything bad upon him, so hopefully his ailment won’t be life-threatening.

I’m sure we’ll learn more about this story as the day progresses.

HYANNIS — U.S. Senator Edward M. Kennedy was rushed by ambulance to Cape Cod Hospital this morning after falling ill at the Kennedy compound in Hyannisport.

Hyannis fire responded to the compound after a call was made around 8:30 a.m. It’s unclear what Kennedy’s medical condition is, but after he spent almost two hours in the emergency room a decision was made to transfer him to Mass General Hospital in Boston.

Kennedy, 76, was placed on a stretcher and wheeled out to the MedFlight helicopter around 10:15 a.m. where it took off from Barnstable Municipal Airport.

Here’s a photo of Kennedy being transported (also courtesy of the Cape Cod Times): 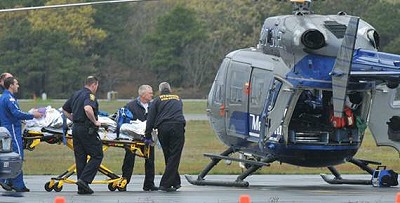 Caption: Sen. Edward M. Kennedy is transported on a stretcher to a waiting Med Flight
helicopter at Barnstable Municipal Airport this morning for transport to a Boston hospital.
Steve Heaslip/Cape Cod Times

Update 2 – 2:05 PM: Fox News is reporting that one of their sources are saying Kennedy suffered two strokes this morning, and a Kennedy spokesman says he’s resting comfortably at the hospital while a “battery of tests” are being run.