Add one more fanatical Obama supporter to the list of those who have completely lost touch with reality. The headline to the following opinion piece should give you all you need to know in terms of where the piece heads – straight into liberal lala land:

Ignoring the issue of Jesus’ color (we know he wasn’t black), what’s with the comparison of Barry Oh! to a Jesus, anyway? I think we can say it’s official: There are Obama supporters who really do believe he’s a modern day “messiah.” Will there be an official Obamessiah “prayer room” at the DNC?

Related: Ever heard of “OMBama Yoga”? Now you have:

OmBama – Yes We Can!
OMbama Yoga classes! Enjoy these radically inspiring all level yoga classes of incredible, heartfelt practices for change! Join us for an eclectic and joyful practice as we celebrate the upcoming election and the opportunity of participating in the political process with one another and invoking the spirit of Obama’s own phrase, YES WE CAN! The instructors who will be leading these practices will be sharing their unique styles and collaborating with one another to inspire and serve and support you in this election year!
(These classes will be held through election day in Nov 2008!)

The silver-tongued Barack Obama’s words are on tee shirts selling at Om Time, an oasis of tranquility sandwiched between the Colorado Democratic headquarters on one corner, and the center for the Obama campaign on the other, along with a slice of tattoo shop and art gallery garnish. “The Union may never be perfect but generation after generation has shown that it can always be perfected,” proclaims the tee-shirt in the Om Time window.

It hangs just south of the shri shrine, and the peace and love tee shirts you’d expect. Walk by quickly and you’d think the silk-screened image of Obama’s close-shaved head was Ghandi’s. 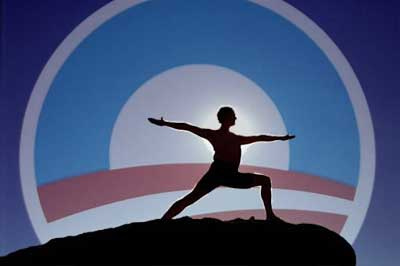