It’s gone from “I’m from the government, and I’m here to help” to “the United States government will stand behind your warranty.” Good catch, Mary Katharine.

The comments were made today by our President in the middle of his announcement about what the gov’t plans to do about GM and Chrysler. Essentially Barack Obama is now the CEO/CFO/COO of GM and Chrysler (especially when you consider the fact that the administration “insisted” that the head of GM step down, which he did). About the only thing I find remotely humorous about any of this is the Photoshop the Exurban League blog created of the front lawn of the WH: 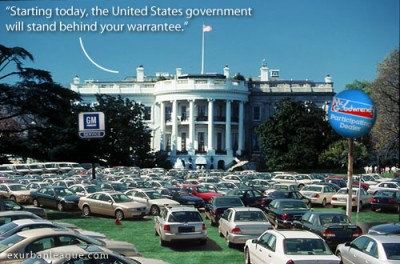 On a more serious note, Jennifer Rubin sums up the thoughts of many:

So if they are going to use bankruptcy to “cleanse” debt and rewrite labor agreements why not, you know, just do it? Why make this all about the president throwing his weight around and personally firing the head of a major corporation? You got me. Perhaps there is some hidden economic rationale or required bargaining ploy, but it seems that President Bush and then President Obama should have pointed these companies to the bankruptcy courts some time ago, spared the tax payers billions, and gotten started on the needed restructuring. But that wouldn’t place the president in the center of the action, I suppose.

At some point it becomes clear that this administration’s main goal is not recovery but the elevation of the government, and of this president in particular, above all other economic players. Some would say it’s bold. Others would say it’s the road to tyranny.

Count me in the latter group.