The Wisconsin Policy Research Institute and the University of Wisconsin-Madison Political Science Department recently released a rather extensive poll of 700 Wisconsin residents. Most of the poll questions were Wisconsin-specific (and covered back at my place), but there was one that asked from where the respondents got most of their news. The crosstabs, which I repeat below so you don’t have to head to pages 63 and 64 (pages 71 and 72 of the PDF version) of the lengthy crosstabs release, are rather “interesting”… 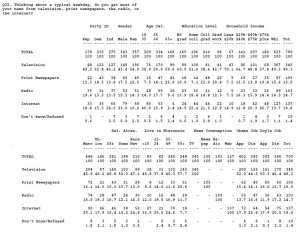 I first must note a couple of things about this question and its answers:

– It is a question of which single outlet each respondent follows the most-often.
– There isn’t a distinction between local news and national news; I suspect there would be a significant change between the two.
– For the “Internet” category, there is no difference between the web presence of the “traditional” media and web-centric entities such as this place or Politico.
– Since Wisconsin does not have party registration enforced at the polls, the party ID is strictly self-identifying, with “strong” and “weak” Republicans/Democrats being identified with that party, but those who merely “lean” toward one party or the other classified as “Independents”.

That being said, there is a very-interesting age-specific trend with print media. 25.9% of seniors say that they get most of their news from newspapers, with the percentage decreasing to 14.1% among those 36-64 years old, and 7.5% among those 18-35 years old. That does not bode well for the future of print journalism, regardless of the presence of bias.

Specifically for local and state-level news, it does not bode well for those who want to stay informed. If local TV news is anything like it is in Milwaukee, pretty much the only things the TV stations cover before the local newspaper are the weather, sports, and sex-offender stings. That is disturbing because across all groups other than the young, TV is the primary source of news.

As for the bias, there is a reason why newspapers are, as a rule, trending even further to the left. They are the second-most-popular primary source of news among Democrats at 18.5%, while they are near the bottom among “independents” (at 13.8%, it barely tops the radio), and at the absolute bottom among Republicans (12.3%, a full 6.1 points behind third-place Internet). Therefore, they’re servicing those who still pay attention.

I know a lot of people see the Internet as the next big thing for news. As I said before, a plurality of the youth (40.0%) get most of their news through it. Moreover, 24.0% of “independents”, which is second among that group, get most of their news from the Internet. However, I don’t know where the money is to support more than a thimbleful of web operations. A couple of places like The Wall Street Journal, Hot Air, and Right Wing News may be making a little bit of money on their web operations, but those are rather unique situations. Most of the web operations, from media outlets to blogs, don’t make enough money to pay the bills.

Worse, they can’t really charge enough for content to make it worthwhile. I wish I could remember the original source, but I heard on “Wall Street Journal This Morning” a couple weeks back that something as potentially-popular as in-flight Internet cannot be priced at a point where it will be used by enough people to be profitable once the novelty wears off. I can speak from personal experience that, while being able to surf while in the air is nice, I will not pay the $8-$10 it takes to do so on a flight the next time I’m in the air.

5 Responses to "Whither print media?"