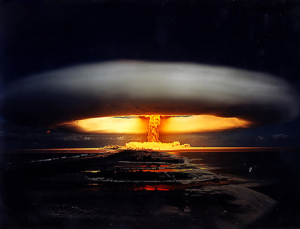 Well, this is reassuring: In 1961, a nuclear-armed B-52 breaks up over Goldsboro, North Carolina, and in the process releases two 4-megaton H-bombs, one of which nearly detonated:

The accident happened when a B-52 bomber got into trouble, having embarked from Seymour Johnson Air Force base in Goldsboro for a routine flight along the East Coast. As it went into a tailspin, the hydrogen bombs it was carrying became separated. One fell into a field near Faro, North Carolina, its parachute draped in the branches of a tree; the other plummeted into a meadow off Big Daddy’s Road.

Jones found that of the four safety mechanisms in the Faro bomb, designed to prevent unintended detonation, three failed to operate properly. When the bomb hit the ground, a firing signal was sent to the nuclear core of the device, and it was only that final, highly vulnerable switch that averted calamity. “The MK 39 Mod 2 bomb did not possess adequate safety for the airborne alert role in the B-52,” Jones concludes.

According to the writer of the original report on the incident, Parker Jones, there were over 700 “significant incidents” between 1950 and 1968.

15 Responses to "The day we almost nuked North Carolina"