Yesterday, I got wind of yet another hit piece on NC’s GOP-dominated General Assembly (our state legislature) from a national left wing “news” outlet, this time the National Journal.  The cover of the magazine, was intentionally provocative: 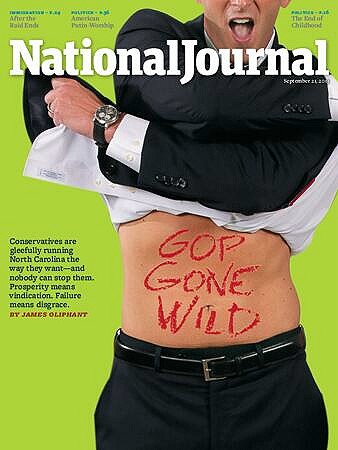 HIT THE PANIC BUTTON! The cover screams. The state is firmly in the hands of Rethuglicans and NO ONE CAN STOP THEM. RUN FOR THE EXITS!  Can you imagine a similar cover about California’s Democrat domination of their state legislature? Of course not.  Because they’re Democrats ‘trying to do the right thing for Californians’, you see.   I suspect Phineas would beg to differ with that assessment – and he’d be right.

Think you’d ever see a similar cover from National Journal or any other respected publication if the General Assembly and Governor’s mansion were controlled by Democrats? If so you’d be wrong – because in the case of the North Carolina General Assembly, until 2010 Democrats had a strangehold on the state legislature and the Governor’s office – going well over a century.  Pat McCrory, whose term started in January of this year, is only our 4th Republican Governor since 1901.  While the GOP has a super-majority this year and next, that’s a far cry from the Democrat Party’s political domination of this state going back some 125+ years.  Where has the National Journal been on this?  Warning readers that “NOBODY CAN STOP THEM!”?  Oh, yeah, it’s that whole “Democrats have the best interests of North Carolinians” thing – right. I almost forgot.

Anyway, beyond the cover it didn’t get much better. In fact, it got worse.  writer James Oliphant wrote:

RALEIGH, N.C.—She was the self-described “new sheriff in town,” and Bev Perdue promised, a thousand years ago in 2008, to change the way North Carolina did business. As a woman and a Democrat, she embodied the quantum electoral shift that was occurring across the nation, one powered by the nascent Obama coalition. The nation’s first African-American president had just edged out a stunning win in this Southern state, and Gov.-elect Perdue had ridden the surge, along with Sen.-elect Kay Hagan. With its diversifying electorate, its thriving cities, and both legislative chambers and the Governor’s Mansion in Democratic hands, the state seemed on the verge of a new, more progressive—and, yes, if you want go there—bluer era.

Cut to: The new sheriff’s being run out of town on a rail, along with the Democrats running the General Assembly. The state is once again subject to single-party hegemony, but it looks a lot different. Now the only progressives who can be claim to be doing anything meaningful in the state capital are the ones who jammed it in protest every Monday this summer as they watched conservative legislators dismantle as much of their legacy as fast as possible.

The Republicans, too, are out to reshape the way the state does business, but in a much more radical way. They have the keys to the entire kingdom: They own a supermajority in the Legislature and have a compliant ally in Gov. Pat McCrory, Perdue’s Republican successor. As such, they essentially govern unchecked and unopposed, exerting their will on everything from taxes to abortion to voting rights to the social safety net to more arcane matters like denying the city of Raleigh the use of state land for a public park.

FASCINATING! Oliphant briefly touches on how Democrats were previously in control, but doesn’t mention for how long and, as a result of his ignorance, there are no complaints from him about the “unchecked, unopposed”  power Democrats had on this state going back to the late 1800s.  What’s also especially interesting about Oliphant’s piece (make sure to click on the link for a full page full of the predictable left wing fear-mongering about how our red state is trying to take us back into the dark ages  – when and where, ironically – Democrats were in control) is how he insinuates the state was running smoothly under Perdue and her gang of merry Democrats, and that they were on the cusp of something big until the GOP came along and had to spoil the fun.  Actually, nothing could be further from the truth. Not only did Democrats badly run this state into the ground financially (SHOCK!) with nothing to show for it outside of an extremely high tab, allegations of cronyism and corruption plagued Perdue, whose party was besieged with corruptocrats during and prior to her one and only term (Mike Easley-D, who was her predecessor, eventually became the first former governor in state history to be convicted of a felony). As a result of disgust from the scandals -as well as their inability to foster an economically viable business climate that would help put people back to work, in 2010 North Carolina gave Republicans the control of the General Assembly for the first time in over a century, and 2 years later our majorities increased – and we got a GOP Governor and Lt. Governor on top of that.

State Democrats contend our majorities increased in 2012 only because of GOP-led “gerrymandering” but they can’t explain  how “gerrymandering” wasn’t “needed” for the GOP to win the majority in 2010, nor does it compute with them that “gerrymandering” had nothing to do with McCrory (Governor) and Forrest (Lt. Gov) winning statewide offices in 2012.  Facts matter, after all, and the fact was the people of this state wanted new leadership – and they got it.

Oliphant – who thinks like North Carolina Democrats in that we should all be deeply worried about a party that has made the business climate more friendly to investors, is targeting waste, fraud, and abuse in the public sector, believes in the rights of the unborn and in the sanctity of marriage,  and that thinks parents should have more options when it comes to the education of their children – clearly is not up on the history of NC politics, specifically on who has controlled the state legislature for well over a century, until the last few years, and on how things ran here when Republicans WEREN’T in power. Let this post serve as a primer of sorts, in case he ever gets curious.

One Response to "#NCPOL: A history lesson for @NationalJournal on #NCGA “political party domination”"