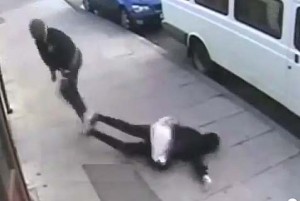 Because anger at your own difficulties and resentment of another’s success totally justifies punching people in the face:

Councilwoman-elect Laurie Cumbo, who was elected to represent Crown Heights starting in January, released an open letter Tuesday saying that many of her black constituents told her they feel threatened by the growth of the neighborhood’s Jewish community — and she fears the tension could be spiking the recent violence.

“Many African American/Caribbean residents expressed a genuine concern that as the Jewish community continues to grow, they would be pushed out by their Jewish landlords or by Jewish families looking to purchase homes,” Cumbo wrote in the 1,200-word letter, which was emailed to supporters and posted on her Facebook page.

“I respect and appreciate the Jewish community’s family values and unity that has led to strong political, economic and cultural gains. While I personally regard this level of tenacity, I also recognize that for others, the accomplishments of the Jewish community triggers feelings of resentment, and a sense that Jewish success is not also their success.”

She added that these sentiments among black Crown Heights residents “offer possible insight as to how young African American/Caribbean teens could conceivably commit a ‘hate crime’ against a community that they know very little about.”

Cumbo posted her letter a week after she was quoted making similar remarks to The Jewish Week.

Translation: Instead of working to better themselves and be successful in their own right, these misguided youths are embracing antisemitism and acting like a junior Sturmabteilung prepping for another Kristallnacht. Don’t forget that this area was the site of the infamous (and fatal) Crown Heights Riots, egged on by MSNBC host and noted demagogue Al Sharpton. They’re sitting on a potential powder keg there, and what’s needed is straight talk about bigotry and the punishment of the attackers.

But, instead of condemning the attitudes as well as the attacks, Ms. Cumbo mouths pieties about “no excuse for violence” while giving justification to antisemitism by claiming to understand their feelings.

Pardon me while I roll my eyes.

Evan Bernstein of the Anti-Defamation League gets it right:

“As an organization that has worked for more than 20 years to improve Black-Jewish relations in the aftermath of the Crown Heights riots, we are troubled by the incoming councilwoman’s sentiments, particularly her comment about resentment over Jewish economic success, which evokes classic anti-Semitic stereotypes,” New York Regional Director Evan Bernstein wrote in a statement.

“Still, it seems from her letter that she means well and we would be open to meeting with her and others in the community to continue the dialogue.”

She may mean well, but well-intentioned fools can do a lot of damage. Let’s hope Councilwoman-elect Cumbo wises up so she can be of real service to all the residents of her district.

3 Responses to "NYC pol on knockout attacks: Blame the Jews"