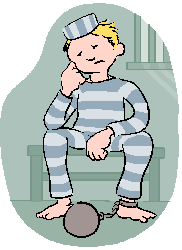 Two former leaders of the Oakland County Democratic Party are facing a total of nine felonies for allegedly forging election paperwork to get fake Tea Party candidates on November’s ballot.

“It is not a partisan statement, and we need to make that very clear,” said Oakland County Prosecutor Jessica Cooper.

“Some of the people didn’t even know they were on the ballot till they began receiving delinquency notices of filings that were required as a candidate,” said Oakland County Sheriff Michael Bouchard.

The sheriff says 23 statewide races had questionable Tea Party candidates on the ballot and the investigation may go beyond Oakland County.

Bad liberals, bad! No biscuits for you!

Try 14 years in prison, instead.

Ed Morrissey notes that the grand jury is still investigating this, even those these two Democrats have been indicted. That hints at further indictments, maybe at a statewide level.

Oh, and you know what the cherry on top of this Scandal Sundae is? It was all for nought! Try as they might to rig the election*, Democrats lost control of the legislature and the governor’s office, turning the state bright Red.

Great job, guys. That should make your prison experience that much more meaningful.

(By the way, that is an essential book for anyone concerned about the health of our electoral system.)

*And I don’t for a minute think this was just a local matter.