Sure, I’m being facetious in the headline (“Fallin who?”), but in one sense I’m not; freshman Oklahoma governor Mary Fallin is presiding over a economic mini-boom in her state. Check out this interview on Fox & Friends: 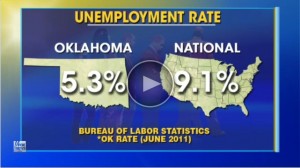 Now don’t you think Obama would give his last piece of arugula to have Oklahoma’s 5.3% unemployment rate? (1) But that would require him to give up his fallacious Keynesian dogmas and abandon his Socialist intellectual framework. I think I’ll see the sun rise in the West before that happens.

What Fallin and the Oklahoma legislature have done is what other states, such as Texas, are doing: establish a competitive tax burden, set out reasonable and predictable regulations, keep government spending within its means, and institute legal reform to prevent frivolous lawsuits. Oklahoma has followed this path and is reaping the benefits. The United States as a whole can, too.

If we elect the right man or woman.

Footnotes:
(1) As would my beloved California, where the official unemployment rate is a nauseating 11.8%. Governor Brown and the Oligarchs of the State Legislature, take note.