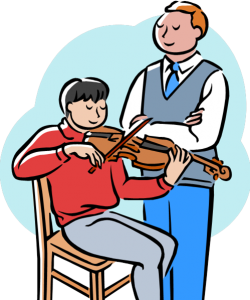 And you guys worry about Iran getting nuclear weapons? Fools! Thank God the FTC is there to protect us from the danger of unregulated violin instructors!

The Federal Trade Commission was created in 1914 in the age of oil barons and rail tycoons to bust the big trusts. Today, it’s busting a smaller enterprise – the Music Teachers National Association.

Last March, the FTC sent notice to the MTNA that it was under investigation for “anti-competitive practices.” At issue: a passage in the trade association’s ethics code that says teachers should not actively recruit from other teachers.

“We feel that that provision not only protects the students but ensures that teachers are going to get along well with their colleagues, ” says Gary Ingle, the MTNA’s executive director.

Ingle says it’s a method of avoiding the rare conflict, where, for example, an accomplished student pianist may be approached after a competition by a rival instructor who promises to help the student win the next competition.

The FTC sees it as a threat to America’s consumers.

There’s nothing in the rules that prevents a student from seeking out another teacher on their own, of course, and the FTC hasn’t shown how anyone has been harmed by a rule that prevents teachers from poaching each other’s students, but, apparently some bored bureaucrat decided that SOMETHING MUST BE DONE about this clear and present danger.

The MTNA has removed the rule while it figures out how to respond to the FTC’s investigation. So far, it’s amounted to a waste of member’s dues:

MTNA’s Ingle says that’s already happening. His 12-member staff in Cincinnati, Ohio has had to compile 17 years worth of records, including its by-laws, ethics code, journals, finances and membership to satisfy the FTC’s demands.

Sounds like what the IRS did to conservative groups, no? Beat them into submission by hitting them with burdensome documentation demands — and legal fees, should the group decide it needs representation.

Obama’s America: Where nothing is beneath the Federal government’s notice, except Iranian nukes.

9 Responses to "Iran can go on enriching, but music teachers must be stopped"