(Note: This is a re-posting and slight editing of a post I put up every D-Day.) 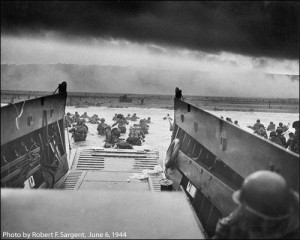 Black Five put up an excellent roundup of D-Day posts from many blogs a few years ago. It’s still worth reviewing. And have a look at this entry for a photo essay on D-Day.

Seventy years ago this June 6, the Americans, British, and Canadians stormed the beaches of Normandy in the largest amphibious invasion of Europe since the Persian king Xerxes invaded Greece in 480 b.c.

About 160,000 troops landed on five Normandy beaches and linked up with airborne troops in a masterly display of planning and courage. Within a month, almost a million Allied troops had landed in France and were heading eastward toward the German border. Within eleven months the war with Germany was over.

D-Day ushered in the end of the Third Reich. It was the most brilliantly conducted invasion in military history, and probably no one but a unique generation of British, Canadians, and Americans could have pulled it off.

Read the rest. While giving the Russians their due, he puts their contribution in perspective.

RELATED: The Daily Mail tells the story of one Medal of Honor winner who still wonders how he survived Normandy.

UPDATE: In today’s newsletter, Real Clear Politics quotes the prayer FDR read when announcing the invasion to the nation:

“Almighty God: Our sons, pride of our nation, this day have set upon a mighty endeavor, a struggle to preserve our Republic, our religion, and our civilization, and to set free a suffering humanity,” the president said while the outcome of the battle was still in doubt.

“They will need Thy blessings,” FDR continued. “Their road will be long and hard. For the enemy is strong. He may hurl back our forces. Success may not come with rushing speed, but we shall return again and again; and we know that by Thy grace, and by the righteousness of our cause, our sons will triumph…”

Imagine a president saying something like that nowadays; the Left would have a fit.

But, forget them. Today’s a day to remember genuine heroes and thank Divine Providence we had such men on our side.