Update I: Here’s the official story, from the Associated Press:

The balloting marked a personal triumph for him, but also a snub to Pelosi, moments after the rank and file selected her unanimously to become speaker when the House convenes in January.

“We made history and now we will make progress for the American people,” Pelosi told the party caucus moments after her selection.

Pelosi also called for unity in the party, but within moments she put her prestige on the line by nominating Murtha for majority leader.

Murtha is powerful lawmaker on defense matters, and he gained national prominence last year when he called an end to U.S. military involvement in Iraq.

He and Pelosi have long been close, and when Pelosi issued a statement supporting Murtha on Sunday night, it raised the stakes in a leadership election within a party that is taking control of the House in January for the first time in a dozen years.

Pelosi and Hoyer have long had a difficult relationship. The two ran against each other in a leadership race several years ago. Pelosi won, but Hoyer rebounded more than a year later when he was elected the party’s whip.

His margin of victory reflected a pre-election strategy in which he showcased support from moderates, veteran lawmakers in line to become committee chairmen and more than half of the incoming freshman class _ the majority-makers whose victories on Election Day gave the party control of the House.

The intraparty battle had preoccupied Democrats, overshadowing Pelosi’s promotion to speaker _ a position that is second in line of succession to the presidency.

Many Democrats were dismayed that the family feud had broken out in the first place and objected to heavy pressure placed on longstanding Hoyer supporters.

Update II: Look at the look on Murtha’s face. Heh: 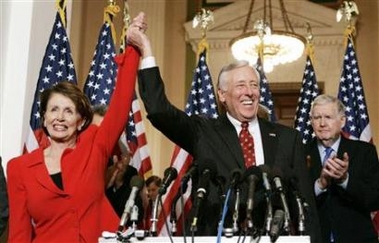 Allah’s got video of the Dem House leadership announcement presser.

Update III: This photo is even better