Heck, he sure sounds like the left’s version of a warmonger here (emphasis Red State’s):

JOHN MCCONNELL, Director of National Intelligence: “Sir, I know the military is working that border area to close it down from not only weapons but also jihadists coming in –”

LEVIN: “It’s more than just — we’re trying to close down the Iranian border area too. The problem is that these weapons are coming from a state which is — doesn’t recognize Israel either, just like Iran doesn’t. We’ve got to try to stop weapons coming into Iraq from any source that are killing our troops. I agree with the comments about trying to stop them coming in from Iran, I think we have to try stop them that are going to the Sunni insurgents as well as to the Shia. I was just wondering, does the military have a plan to, if necessary, to go into Syria to go to the source of any weapons coming from Syria? That are going to Sunni insurgents? That are killing our troops? â€¦ I think we ought to take action on all fronts including Syria and any other source of weapons coming in, obviously Iran is the focus â€“ but it shouldn’t be the sole focus.” (Armed Services Committee, U.S. Senate, Hearing, 02/27/07)

Hey Senator, are you “cooking up” the threats from Middle Eastern countries, too? Better hope word of your rhetoric doesn’t get back to your fellow Dems in the Senate, and other ‘critics‘ of the admin’s talk about those threats … Otherwise, you might be declared a: 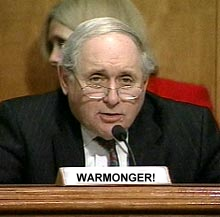