Just when you thought you’d seen it all comes greeting cards for women who’ve had abortions. This one jumped out at me: 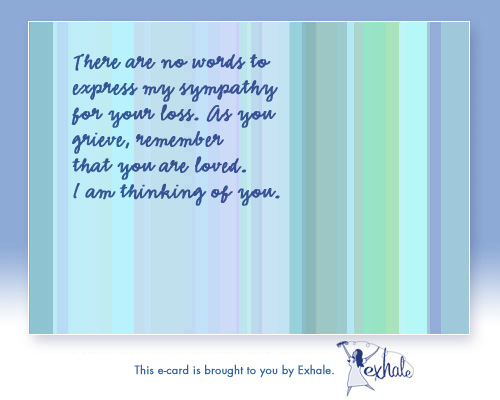 Your “loss”? How can an abortion be considered a ‘loss’ when the aborted baby isn’t even considered a growing life in the first place and is instead looked upon as a “parasite” or “blob of tissue”? And furthermore, it’s not a “loss” if you choose to abort it.

In all seriousness, I’m not knocking the fact that women need emotional support after an abortion – in fact, that’s precisely my point: that women are emotionally scarred by having an abortion because they know what they’ve done is wrong. Back on the anniversary of Roe v. Wade, I wrote this:

There are conflicting studies out there which show on one hand that ‘most’ women who have abortions are not emotionally scarred by it and feel relieved once it’s done, while others show that having an abortion scars a woman for life, some more so than others. The truth is somewhere in between, but make no mistake about it, the decision to have an abortion is not one that most women make in a snap. They think about it and agonize over it, and there’s a reason they agonize over it: because deep inside, they know it’s wrong. Last October, I blogged about a hospital in the UK that was discovered to have thrown aborted babies into the same incinerator they used to get rid of trash, which outraged not only pro-life groups, but some of the women who had abortions there, who thought it was a horrible way for their baby to be dispensed with, which tells you about how torn women who have abortions are between doing what’s right (keeping the child) versus doing what is convenient (aborting them) and the guilt which eats at them later. Women are reassured prior to the abortion that their unborn child will be buried or dispensed of ‘with dignity’ but why worry about the dignity of the child when you didn’t want it to begin with? If you’ve made the choice to abort your child, you have little room to complain when you find out how it’s been disposed of, but all the same the thought that women could be horrified to find out something like that happened to their unborn baby after they aborted it shows that they know deep down that what they did was wrong to begin with.

If women who had abortions really believed that what was in their wombs was nothing more than a “parasite” or “blob of tissue” they simply wouldn’t feel the level of guilt that they do over aborting it. They also wouldn’t balk at the idea of the “contents” of their womb being dispensed with in an incinerator. So that begs the question: if you know it’s wrong …

Also, how about a lot more counseling WHILE considering abortion, rather than wait til it’s too late to turn back?

The AP reports on the cards here:

[Aspen] Baker [founder & executive director of “Exhale”] said she hoped popular e-card sites might start offering links to Exhale’s line, which is offered in English and Spanish. In the meantime, she plans to spread the word to boyfriends, parents and siblings through doctors’ offices and the post-procedure information packages women usually receive after abortions.

“We designed them to deal with different peoples’ response to abortion. Not everyone is grieving their loss. Not everyone has a relationship with God. Not everyone thinks it is the best thing,” she said. “We hope the people who send them take the time to think not only about the message they want to send, but about what is best for the person receiving it and what they need to hear.”

Need to hear? Or want to hear? Because as far as this issue is concerned, needs and wants are two entirely different things. But we don’t want anyone to feel ‘guilt’ over the consequences of their actions. They ‘need’ to hear that what they did was ok. It’s all about ‘live and let live’ – for everyone but the unborn.

Hat tip: Allah, who sarcastically wonders why more upbeat cards like this one weren’t included. John Hawkins has created a couple of cards, too. Bob Owens has his own version of an ecard here.

14 Responses to "Abortion E-cards: When you care enough to send your very best – to someone who has done the very worst"