Is it just me or does anyone else out there feel a bit surreal about MSNBC’s Don Imus apologizing for racially insensitive comments on Al Sharpton’s radio show?

Yes, this is the same “Reverend” Al Sharpton, the notoriously racist Democrat from who the Democratic party refuses to distance itself because they desperately need the black vote. Columnist and talk show host Larry Elder said it well in this November 2003 column:

Dean’s sin? Dean, in an interview with the Des Moines (Iowa) Register on Saturday, Nov. 1, stated, “I still want to be the candidate for guys with Confederate flags in their pickup trucks. We can’t beat George Bush unless we appeal to a broad cross-section of Democrats.”

As for Sharpton, who appointed this race-baiter as the moral arbiter of the Democratic Party? Sharpton once denounced Jews as “diamond merchants,” and called whites who wished to move into Harlem “interlopers.” For those remarks, Sharpton apologized. But he never got around to apologizing for falsely accusing a former New York district attorney of raping Tawana Brawley in a case that a New York grand jury called fraudulent.

Even before Sharpton announced his candidacy for president, he wrote in his book, “Al on America,” that “presidential politics has become … an exclusive club for white males, of a certain income, of a certain age.” He said he would bring diversity of views and color to the blandly uniform line-up of Democratic candidates. “Without me in the race,” he said, “it will be part of the exclusive club picture again.” This, of course, implicitly suggests that only someone “of color” could represent the interests of those “of color.” So, whites presumably can only represent the interests of whites, women the interests of women, left-handed people the interests of left-handers, etc.

Here’s the video of Imus on Sharpton’s show (h/t Bryan and Ian):

Am I living in some alternative universe here? 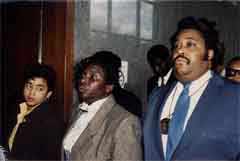 In November of 1987, a 15-year-old girl named Tawana Brawley was found in upstate New York, covered with feces and racial slurs written in charcoal. Brawley, who is black, claimed to have been abducted and raped by six white law enforcement officers.

A decade later, the men who advised Brawley after the alleged incident — Al Sharpton, Alton Maddox, and lawyer C. Vernon Mason — are being sued by one of those six men: Steven Pagones, then a local prosecutor, now an assistant state attorney general.

In a trial that began December 3, 1997 in a Duchess County, New York courtroom, Pagones sought damages for defamation that escalated during the course of the trial from $150 million to $395 million, but returned to $150 million during the eventual damages phase.

Brawley, now 25 and called Maryam Muhammad, appeared after 10-year silence at a Brooklyn rally the night before her advisors’ trial began to insist once more that her charges are true.

Her case was ultimately thrown out in 1988 when a grand jury determined that her story was not credible. Justice S. Barrett Hickman of the New York State Supreme Court has allowed that report to be included as evidence in the current trial.

On July 13, 1998, after a trial lasting almost eight months, a jury found the three advisors liable for defaming Pagones.

Here is the full text of the 1988 grand jury report that cleared Pagones and the other alleged attackers of any wrongdoing.

For a refresher, make sure to visit the link to see the various other links Court TV has on the Brawley/Sharpton racist hoax.

Also, Johnny Dollar at Olbermann Watch has caught Olby in another instance of hypocrisy re: the Imus controversy. Read/hear it here.