… with the gunman still on the loose. The Associated Press is on top of breaking developments in this story.

In addition to an earlier shooting today in West Ambler Johnston, there has been a multiple shooting with multiple victims in Norris Hall.

Police and EMS are on the scene.

Police have one shooter in custody and as part of routine police procedure, they continue to search for a second shooter.

Update II: The MSNBC/AP link above has been updated to note that “officials” are saying there were seven to eight casualties as the result of another shooting incident on the campus.

Amie Steele, editor-in-chief of the campus newspaper, said one of her reporters at the dormitory reported “mass chaos.”

The reporter said there were “lots of students running around, going crazy, and the police officers were trying to settle everyone down and keep everything under control,” according to Steele.

Kristyn Heiser said she was in class about 9:30 a.m. when she and her classmates saw about six gun-wielding police officers run by a window.

“We were like, ‘What’s going on?’ Because this definitely is a quaint town where stuff doesn’t really happen. It’s pretty boring here,” said Heiser during a phone interview as she sat on her classroom floor.

Student Matt Waldron said he did not hear the gunshots because he was listening to music, but he heard police sirens and saw officers hiding behind trees with their guns drawn.

“They told us to get out of there so we ran across the drill field as quick as we could,” he said.

Waldron described the scene on campus as “mayhem.”

“It was kind of scary,” he said. “These two kids I guess had panicked and jumped out of the top story window and the one kid broke his ankle and the other girl was not in good shape just lying on the ground.”

Madison Van Duyne said she and her classmates in a media writing class were on “lockdown” in their classrooms. They were huddled in the middle of the classroom, writing stories about the shootings and posting them online.

The university is updating its 26,000 students through e-mails, and an Internet webcam is broadcasting live pictures of the campus.

Update IV: It just keeps getting worse. The police have confirmed that 22 are dead, including the shooter. They’ve also reported 28 injuries. Allah’s recently started tracking the story here and has several updates.

Update V: MSNBC has ongoing video coverage on their website.

Update VI: MSNBC is reporting that authorities are describing the shooter, who killed himself, as an “American male” – MSNBC is saying speculation is that the shooter may have had an issue with a professor.

Also, via Instapundit (who has linked up to my post – thanks):

And reader John Lucas, who works with a Virginia law firm, emails that Va. Tech is a “gun-free zone.” Well, for those who follow the law. There was an effort to change that but it failed: “A bill that would have given college students and employees the right to carry handguns on campus died with nary a shot being fired in the General Assembly.” That’s unfortunate.

Update VIII: ABC News is reporting that there are 25 dead. A person who was shot who called into MSNBC described the shooter as an Asian male. ST reader ChefJeff noted that in the comments to this post as well.

View photos of the scene here.

From Virginia Tech: Virginia Tech has closed today, Monday, April 16, 2007. On Tuesday, April 17th, classes will be cancelled. All students and faculty, and staff are required to stay where they are until police execute a planned evacuation. A phased closing will be in effect today: further information will be forthcoming as soon as police secure the campus. Tomorrow, there will be a university convocation/ceremony at noon at Cassell Coliseum. The Inn at Virginia Tech has been designated as the site for parents to gather and obtain information.

Update 10: The lockdown has been lifted from Virginia Tech and the ATF is on the scene.

Update 11: CNN has video from the scene where you can hear shots being fired. Go to this page and scroll down to “Jamal Albarghouti” for the link (I can’t post it here – it’s a javascript link).

Also, ABC is reporting there were two bomb threats at the school in the last two weeks. Could there be a connection?

The AP compiles a list of deadly campus shootings.

Update 12 – 2:40 PM: Here’s a direct link to the video of shots heard being fired, via Brightcove.

Update 14: Here are some eyewitness photos from the scene. A VTech alumni in Fairfax, VA blogs with their thoughts (via an update to Instapundit’s post).

Just to be clear I’m not blaming anyone but the shooter for this incident, but I do think some questions about the delay between the first shooting — with the 911 call reportedly coming at 7:15 — and the campus shutdown approximately 90 minutes later need to be answered.

Indeed. As I was listening to MSNBC’s coverage of the shootings earlier, several people brought up that same point. If the first call came at 7:15, why did so much time lapse before the lockdown occured – especially considering that the second shooting reportedly happened sometime after 10? Clearly, you had students going to class after the first shooting occurred, having no idea of what had happened. Many people are going to have a lot to answer for in the aftermath of this tragedy.

Update 15: The FBI has confirmed that the death toll has risen to 32. (Via AJ Strata)

Monday, April 16th 2007 2:13PM
As of now, 32 people are confirmed dead. One person from West Ambler Johnston Hall and at least 20 people from Norris Hall have been killed. The shooter as well has been killed, but it is uncertain as to whether it is a student or not.

The university is requesting that students limit movement while police continue their investigation.

Update 17: Today’s massacre has brought back to mind for a lot of people the horrific shootings at Columbine High School which happened back on April 20, 1999 where 13 were murdered (the two killers, Columbine students Dylan Klebold and Eric Harris, killed themselves) A memorial for the victims of the Columbine tragedy is in the works and its expected completion date is June or July of this year. Photos of the design can be viewed here. Construction photos are here.

Pleaes remember the families of victims of senseless tragedies like these in your prayers tonight.

Update 18: Lots of news has been reported since my last update:

The Chicago Sun Times reports that authorities at VTech are saying that they thought the first shooting was a domestic dispute and had that particular dorm put on lockdown, thinking the killer might have fled the scene. Supposedly, this was why no alert ever came out with a warning that a killer was on the loose. The Sun Times is also reporting that authorities are investigating the possibile identity of the killer:

Authorities were investigating whether the gunman who killed 32 people on the Virginia Tech campus in the deadliest shooting rampage in U.S. history was a Chinese man who arrived in the United States last year on a student visa.

The 24-year-old man arrived in San Francisco on United Airlines on Aug. 7 on a visa issued in Shanghai, the source said. Investigators have not linked him to any terrorist groups, the source said.

Police believe three bomb threats on the campus last week may have been attempts by the man to test the campus’ security response, the source said.

The UK Daily Mail sensationalizes and makes this about a lover’s spat turned violent.

Local6 is reporting that the doors in Norris Hall were chained from the inside, presumably by the killer.

Roanoke.com is on a developing story about a “person of interest” authorities are interviewing in the first shooting that happened in the dorm:

[…] Authorities said they are still trying to determine whether the shootings at West Ambler Johnston Hall and Norris Hall are related. They have identified a “person of interest” in the Ambler Johnston shootings but do not have anyone in custody. That person is cooperating with authorities, they said. At Norris Hall, 31 people â€“ including the shooter â€“ were killed. Virginia Tech Police Chief Wendell Flinchum said the scene at Norris was “probably one of the worst things I’ve seen in my life.” Authorities have made a preliminary identification of the shooter but don’t plan to release his name, or that of any of the victims, until tomorrow. Another two, a woman and a male resident assistant, were killed at Ambler Johnston.

ABC News has reports from students who were on campus at the time of the murders. Some of them describe seeing other students jump from the building. My mom and dad live up the street from the parents of two VTech students. Dad contacted the neighbor this afternoon and he said his kids are ok, but he has a nephew who attends VTech and he was alerted that he jumped out of a two story window to escape and broke his ankle. His kids hadn’t yet gotten to school that day, but would have been in the building next to the one where the majority of the shooting and loss of life took place.

Update 19: FoxNews is reporting that some parents are calling for both VTech’s president and police chief to be fired.

Update 20: ABC is reporting on the possibility of a second killer, and also reports that the dead killer was hard to identify because when he shot himself part of his face was missing once he was found.

Update 21: Ya knew it had to happen. Liberal icon Larry Johnson, who is well known as a Bush-hating bigot who doesn’t think Hezbollah is a terrorist organization and who said it was a ‘small wonder’ Karl Rove’s mother killed herself, is comparing the massacre at VTech to Iraq. A HuffPo blogger says Iraq is partly to blame for today’s tragedy. Another HuffPo blogger is calling for the 2nd Amendment to be rewritten.

Michelle Malkin notes the media is already cranking up its anti-gun campaign.

Update 22: I leave you with this. Good night, all, and keep up those prayers. 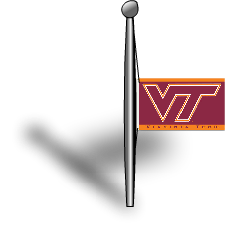