Today is the eve of the 20th anniversary of the Gipper’s famous “tear down this wall!” speech. The Washington Times reports that line almost didn’t make it into the speech:

The president overruled his advisers and, as he rode through the streets of West Berlin on June 12, 1987, he told an aide that his speech at the Brandenburg Gate was simply “the right thing to do.”

Addressing a crowd of thousands as he stood before the Berlin Wall — the world’s most notorious symbol of Soviet tyranny — President Reagan declared: “Mr. Gorbachev, tear down this wall!”

Tomorrow, former White House speechwriter Peter Robinson will recount the story behind those famous words during a special event at the Reagan Ranch Center here.

“It’s an opportunity to honor one of Ronald Reagan’s greatest achievements — winning the Cold War, as [British Prime Minister] Margaret Thatcher said, without firing a shot,” said Andrew Coffin, director of the center, operated by the Young America’s Foundation, which is hosting the 20th-anniversary commemoration.

Known as a staunch anti-communist long before he became president, Mr. Reagan had predicted in a 1982 speech to the British Parliament that Marxism was destined for “the ash heap of history,” and in 1983 had denounced the Soviet Union as an “evil empire.”

His 1987 speech at the Brandenburg Gate, invoking the name of Soviet leader Mikhail Gorbachev, was destined to become his most famous. A little more than two years later, in November 1989, the Berlin Wall was torn down — not by Mr. Gorbachev, but by the German people — dramatically symbolizing the collapse of communism.

Yet the speech’s most famous phrase nearly didn’t make it into the final draft.

Mr. Robinson, then a 31-year-old in his first full-time job, had been inspired by an earlier visit to West Berlin. There, he met with a group of residents, including Ingeborg Elz, who spoke bitterly of Mr. Gorbachev’s promises of “glasnost,” or openness, and “perestroika,” or reform.

“If this man Gorbachev is serious with his talk of glasnost and perestroika, he can prove it,” Mrs. Elz told Mr. Robinson. “He can get rid of this wall.”

As he recalled in his 2003 book, “How Ronald Reagan Changed My Life,” Mr. Robinson decided to include that demand in the Berlin speech Mr. Reagan was due to deliver in June. The president liked the idea. The State Department and the NSC, however, disapproved.

Among those who urged Mr. Robinson to omit “tear down this wall” from the speech were Secretary of State George Schultz, White House Chief of Staff Howard Baker, and Colin L. Powell, who was deputy national security adviser at the time. But Mr. Robinson argued in favor of keeping the phrase, and Mr. Reagan agreed.

Wanna watch the speech and relive some great memories? Here you go. The money quote is about two minutes thirty seconds into the vid:

And so it was. 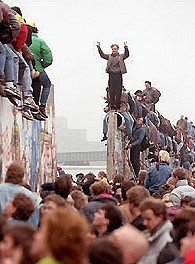