Did Bill Clinton hate Armenians like GWB supposedly does? This little tidbit was buried at the bottom a report from The Hill.com:

During his presidency, however, Bill Clinton also worked to block an Armenian genocide resolution from passing the House.

Interestingly enough, look at which House Democrats are against Pelosi’s Turkey misadventure (again, via The Hill):

Five House Democrats plan to hold a news conference Wednesday to urge their leadership not to bring the resolution to the floor, although the measure passed the House Foreign Affairs Committee last week with strong Democratic support.

Reps. Alcee Hastings of Florida, John Murtha of Pennsylvania, Robert Wexler of Florida and Steve Cohen and John Tanner, both of Tennessee, will participate in the news conference. They plan to urge House leadership to “reconsider its decision” to bring the Armenian genocide resolution to the floor.

Brian Faughnan at The Weekly Standard blog has some additional info:

Besides the Congressmen participating in this press conference, House Armed Services Committee Chairman Ike Skelton (D-MO) has quietly written Speaker Pelosi and asked her to defer consideration of the genocide resolution. Skelton’s fear–likely shared by Murtha, at least–is that without Turkey’s help, it will be harder to get out of Iraq:

If the fact that she may not have the votes to get this resolution passsed doesn’t convince her to drop consideration of it, Skelton’s idea that this could speed up the “redeployment” (aka cut and run) of our troops from Iraq could possibly make Pelosi change her mind.

It’s doubtful, though, and assuming the resolution does get put out there for a vote, it will be interesting to see who votes on what side. If it fails – and we all certainly hope it does – it will be yet another defeat for Pelosi’s anti-Iraq war agenda in the House. 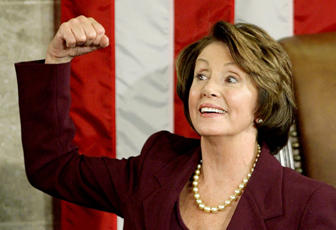 Will she or won’t she be able to strong arm House
Democrats into voting for this resolution? Stay tuned …

Update: The NYTimes reports that this resolution is steadily losing support:

WASHINGTON, Oct. 16 — Worried about antagonizing Turkish leaders, House members from both parties have begun to withdraw their support from a resolution backed by the Democratic leadership that would condemn as genocide the mass killings of Armenians nearly a century ago.

Almost a dozen lawmakers had shifted against the measure in a 24-hour period ending Tuesday night, accelerating a sudden exodus that has cast deep doubt over the measure’s prospects. Some made clear that they were heeding warnings from the White House, which has called the measure dangerously provocative, and from the Turkish government, which has said House passage would prompt Turkey to reconsider its ties to the United States, including logistical support for the Iraq war.

Until Tuesday, the measure appeared on a path to House passage, with strong support from House Speaker Nancy Pelosi. It was approved last week by the House Foreign Affairs Committee. But by Tuesday evening, a group of senior House Democrats had made it known that they were planning to ask the leadership to drop plans for a vote on the measure.

“Turkey obviously feels they are getting poked in the eye over something that happened a century ago and maybe this isn’t a good time to be doing that” said Representative Allen Boyd, a Florida Democrat who dropped his sponsorship of the resolution on Monday night.

Others who took the same action said that, while they deplored the mass killings of Armenians by the Ottoman Empire, the modern-day consequences in the Middle East could not be overlooked.

“We simply cannot allow the grievances of the past, as real as they may be, to in any way derail our efforts to prevent further atrocities for future history books” said Representative Wally Herger, Republican of California.

Representative Mike Ross, Democrat of Arkansas, said, “I think it is a good resolution and horrible timing.”

“This vote came face to face with the reality on the ground in that region of the world” said Representative Rahm Emanuel of Illinois, the chairman of the House Democratic Caucus and an opponent of the resolution.

The Politico has more.

Please remember to keep the pressure on your House and Senate representatives to voice your opposition to the resolution.