Earlier today in an update to a post about Karl Rove’s reflections on the Democratic Congress and how it’s been a miserable failure, I mentioned that Senator Joe Lieberman, too, has been doing some reflecting about the Democratic party as of late, and linked up to a Powerline post which referenced a NY Sun article containing snippets of a speech he made at Johns Hopkins University’s School of Advanced International Studies.

In his speech, you’ll see in his strongest language to date why he no longer identifies with the Democratic party, and it primarily has to do with their pacificist attitudes towards fighting terrorism, and their visceral hatred of the President, a hatred that consumes them and defies all logic.

Of course Lieberman’s not the first Democrat Senator since Bush was elected President to skewer his own party for their lay-down-and-take-it approach to counterterrorism and irrational hatred of the President:

Today — Today at the same time young Americans are dying in the sands of Iraq and the mountains of Afghanistan, our nation is being torn apart and made weaker because of the Democrat’s manic obsession to bring down our Commander-in-Chief.

What has happened to the Party I’ve spent my life working in?

I can remember when Democrats believed it was the duty of America to fight for freedom over tyranny.

It was Democratic President Harry Truman who pushed the Red Army out of Iran, who came to the aid of Greece when Communists threatened to overthrow it, who stared down the Soviet blockade of West Berlin by flying in supplies and saving the city.

Time after time in our history, in the face of great danger, Democrats and Republicans worked together to ensure that freedom would not falter. But not today.

Tell that — Tell that to the one-half of Europe that was freed because Franklin Roosevelt led an army of liberators, not occupiers.

Tell that to the lower half of the Korean Peninsula that is free because Dwight Eisenhower commanded an army of liberators, not occupiers.

Tell that to the half a billion men, women and children who are free today from Poland to Siberia, because Ronald Reagan rebuilt a military of liberators, not occupiers.

Never in the history of the world has any soldier sacrificed more for the freedom and liberty of total strangers than the American soldier. And, our soldiers don’t just give freedom abroad, they preserve it for us here at home.

For it has been said so truthfully that it is the soldier, not the reporter, who has given us the freedom of the press.

It is the soldier who salutes the flag, serves beneath the flag, whose coffin is draped by the flag who gives that protester the freedom he abuses to burn that flag.

No one should dare to even think about being the Commander in Chief of this country if he doesn’t believe with all his heart that our soldiers are liberators abroad and defenders of freedom at home.

But don’t waste your breath telling that to the leaders of my Party today. In their warped way of thinking America is the problem, not the solution.

They don’t believe there’s any real danger in the world except that which America brings upon itself through our clumsy and misguided foreign policy.

— Senator Zell Miller (D-GA), Republican National Convention – September 1, 2004. His entire speech can be viewed at that link, or if you have trouble with it loading, you can view it here as YouTube has it in three parts.

Joe Lieberman is the Zell Miller of the 110th Congress. 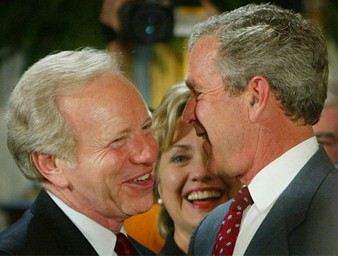 For this, they hate him.