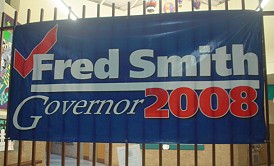 Last month, I wrote a post about one of the Republican candidates for governor here in NC, State Senator Fred Smith, noting that in what little bit I knew of him, I could see that he had some solid conservative credentials. I’m still getting to know Fred Smith, so this post should not be considered an official endorsement, but on Friday night, I had the chance to meet him and get to know him a little bit better and I liked what I heard.

I hadn’t been feeling good that day, but decided to take the opportunity to meet him and some of his supporters to see if what I’d been reading and hearing about him was true. So, feeling a little better that evening thanks to some Dayquil, I stepped out and went to South Charlotte Middle School, where the senator was holding his 55th BBQ event in North Carolina. North Carolina has 100 counties, and his goal is to have a BBQ event in each one, to get to know the voters of the state, and I can tell you that there’s not much of a better way to work your way into someone’s good graces here in NC than by holding a BBQ dinner

. In all seriousness, his efforts at travelling the state to speak directly to voters appear to be paying off.

When I first arrived, the person who drove up and parked next to me had a Ron Paul magnet banner on the side of his car. I worried that, like so many Ron Paul worshippers, he’d try to create a scene at the event, but thankfully the BBQ went on without incident. There was a nice sized crowd at the school, and one of the first people I saw when I walked into the SCMS cafeteria was my good friend and fellow North Carolinian Lorie Byrd, who works with Fred’s campaign. We talked some but she was very busy doing official business for the campaign so I didn’t want to take up a whole lot of her time. I met a few more people from the friendly campaign staff, including Joe Humphries (below), who reads the ST blog 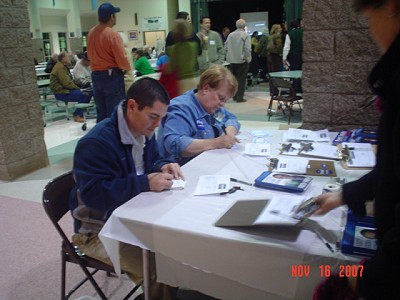 The picture below was taken as people were still filing in: 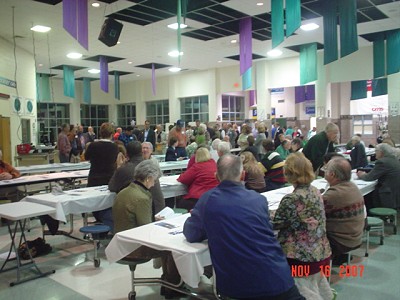 Here’s the Senator speaking to a supporter. There was a long line of people waiting to talk to him: 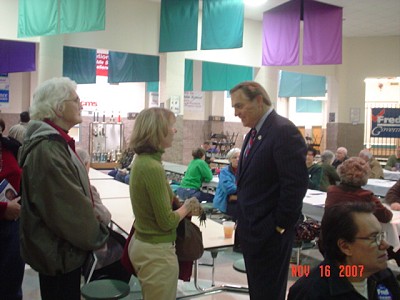 I got a chance to speak with Senator Smith briefly, and he came across as warm and unpretentious, and as someone who was eager to restore this state’s good reputation, which has suffered thanks to the numerous Democrat corruption scandals that have happened over the last few years.

By the time everything got started good, all the seats were filled with people eating BBQ, and all eyes were on the stage to listen to the introductions made for senator Smith, to watch the short video about his life – which was very moving – and then to listen to the candidate himself. The Charlotte-Mecklenburg Republicans in attendance clearly weren’t just hungry for BBQ. They were hungry to hear a conservative message from a candidate who was prepared to deliver one: 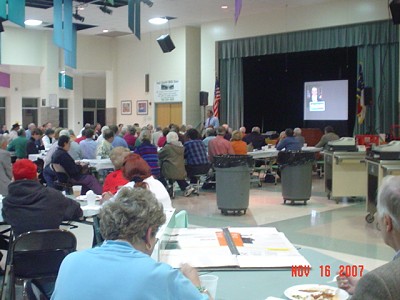 Sorry you can’t see Smith very well in that picture. He’s the guy in the blue shirt standing in front of the American flag. I walked out the door Friday night with the wrong camera (must have been the slight light-headedness I felt from the Dayquil

) so I didn’t get the best pictures him of as he was speaking. In any event, he had a lot of good things to say on many issues, especially on illegal immigration – an issue he’s clearly passionate about. Suffice it to say he’s disgusted as most conservatives are with how the issue has been handled in Washington, DC, and believes it’s up to the states to pick up the slack He’s a strong proponent of 287(g), which “provides the legal authority for state and local enforcement to investigate, detain, and arrest aliens on civil and crimiÂ­nal grounds” (you can read more about 287g here).

When Senator Smith was running for re-election to the NC state Senate last year, he was endorsed by Newt Gingrich. Pretty impressive, eh?

He’s written a book which explains a lot more about who he is, where he came from, and why he believes what he does, and he’s offering it for free to anyone interested. You can go here to request a copy be mailed to you, or to be able to download the book directly from his website. I have a copy myself, and plan on reading it later this week.

Of course, no candidate is perfect, but Smith is the kind of serious candidate who makes you take a second and third look at what he stands for. So many politicians out there come across as empty suits when you meet them. I’m happy to say that Senator Smith is not one of them.

One Response to "Meeting Fred Smith"