—– Andrew Bolt, writing in Australia’s Herald Sun, wrote earlier this week (h/t: ST reader Sev) about a scandal involving its rival publication The Age and how “235 Age journalists confirmed that their coverage of last month’s Earth Hour had been, in effect, propaganda.” Make sure to read the whole thing, and this too for even more. So much for engaging in fair reporting and letting viewers/readers make up their own minds.

This reminds me of NBC’s round-the-clock fawning coverage of Live Earth last year, which was a blatant example of everything that is wrong with agenda-driven “journalism.”

—– My friend Patrick O’Hannigan catches Newsweek inserting a bit of anti-religion bias in their reporting on the Pope’s visit to the US this week.

—– And speaking of the Pope, Media Research has several links this week to anti-Pope bias in the mainstream press.

—– David Vance at Biased BBC notes here the slanted coverage the Beeb has been giving to British Prime Minister Gordon Brown’s first formal visit to the US as PM. They’re saying he will invoke the image of JFK … by standing next to Senator Ted Kennedy. Umm, sorry, Beebs – this is about as close as Brown will get to “invoking” JFK’s image: 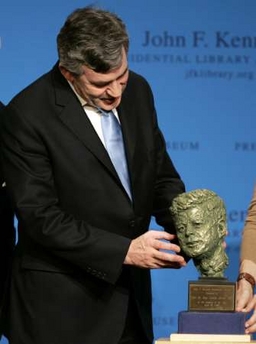 Britain’s Prime Minister Gordon Brown looks at a bust of former U.S. president John F. Kennedy given to him after speaking at the John F. Kennedy Presidential Library and Museum in Boston, Massachusetts, April 18, 2008. REUTERS/Adam Hunger

—– Related to the bias at the BBC, Mike at The Monkey Tennis Centre notes yet another example (similar to this one) of the Beeb making apologies for Islamofascistic “culture” in a post appropriately titled “BBC on child marriage in Yemen: Move along folks, nothing Islamic to see here.” Unreal …

—– Via letter, Karl Rove smacked down Olbermann-in-training evening political talking head show host Dan Abrams for failing to check his facts over the liberal-inspired controversy over former Democrat Governor Don Siegelman, who was convicted last year of bribery and conspiracy and ordered to serve seven years in prison. Siegleman is currently free while appealing his sentence, of which he has only served nine months.

The talking point in lefty circles is Siegleman’s prosecution was politically motivated by Karl Rove. Several news outlets, including CBS, have been buying hook, line, and sinker the word of a questionable “Republican” source, which is why Rove wrote the blistering note to Abrams.

—– NRO Media Blog’s Greg Pollowitz noticed earlier today the Associated Press’ “giddiness” in their story of the Iraqi troops who abandoned their posts after coming under attack from the Mahdi army.

Sat AM Update: Add one more to the list: The Politico’s John F. Harris and Jim Vandehei explore how deeply the mediots have been in the tank for Barack Obama.

One Response to "Media bias odds and ends"