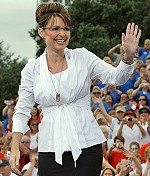 … the attacks on Governor Sarah Palin from far left nitwits continue. Read here about how much the Governor has had to shell out in legal fees in recent months as a result of numerous frivolous “ethics” complaints filed against her, like this one.

The Governor is saying that the legal fees are piling up so much that at some point she may have to set up a legal defense fund. If she does, I’ll make sure to post the link here for anyone who wants to help.

Moral of the story? Never underestimate the far left’s willingness to attempt to destroy the good repuations of those with whom they have significant political differences. Sarah Palin is one of many they’ve tried this with. When left-wing busybodies can’t destroy someone in the arena of ideas, all they have left is to try and personally destroy their opposition. Unfortunately it won’t stop with Gov. Palin, but fortunately, Palin has a strong support network of family, friends, and supporters in Alaska and those of us in America who grew to know and love her during the course of her time as McCain’s running mate. Will she – and her supporters – stand strong against the endless wave of attacks the far left continues to launch against her?

3 Responses to "The election’s long over but …"