To answer my post’s title: obviously, when it’s B. Hussein Obama that does it:

The White House is denying that the president bowed to King Abdullah of Saudi Arabia at a G-20 meeting in London, a scene that drew criticism on the right and praise from some Arab outlets.

“It wasn’t a bow. He grasped his hand with two hands, and he’s taller than King Abdullah,” said an Obama aide, who spoke on the condition of anonymity.

Whew…now that’s some spin. I knew it was coming (the spin)…

This guy, I have to tell you, is going to make the Clinton spin-machine look like child’s play.

…I just didn’t think they’d be this blatant about it. Like we can’t look it up and see for ourselves. Pfft.

Here’s the video, just in case you’re one of the three Americans in the world who hasn’t seen it (at about the :45 mark):

Now, I’m no expert on the subject (and, really, who is?), but that’s clearly a bow. It wasn’t someone bending over to shake another person’s hand. If we are to believe what they’re telling us, either Obama would have to be about ten feet tall or the King of Saudi Arabia would have to be about a foot tall…or both. Of course, people on the left think the average American is nothing but a huge boob that’s incapable of thinking for himself, so I guess they thought they could get away with this. They might have gotten someone to believe it wasn’t a bow if they said, I dunno, that he was comparing “sizes”, if you get my drift. At least that would have been both believable and plausible.

Which brings us to the age-old riddle: “How can you tell when a Democrat is lying? Their mouth is moving.” 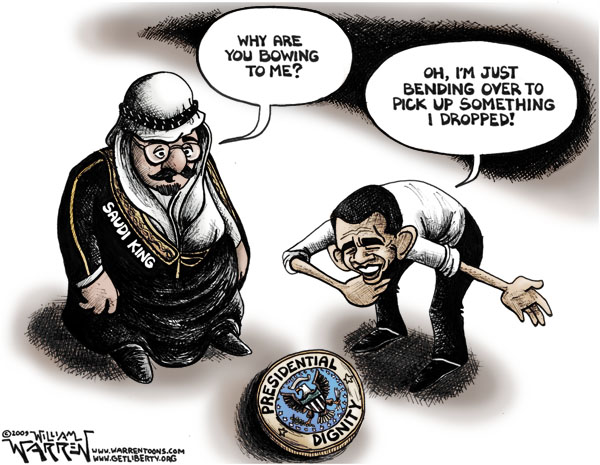