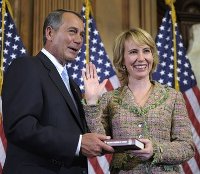 Unless you’ve been hiding under a rock for the last 24 hours, you know about the horrific execution-style shootings that happened yesterday at a Safeway in Tucson, AZ where three-term Congresswoman Gabrielle Giffords (D-AZ8) was holding her first “Congress on Your Corner” meeting with her constituents. She tweeted about it just minutes before being shot point blank in the temple at close range.

The Congresswoman remains in critical condition after being rushed into surgery not long after the attacks happened. Multiple news outlets, however, have reported that doctors are “very optimistic” that she will recover. That’s certainly welcome news, of course. Sadly, 6 of those who were shot have died – including a precious 9 year-old girl named Christina Greene who was born on 9/11/01. Michelle Malkin has more details on the victims here. Please remember them, their families, and the 12 victims who survived in your thoughts and prayers today.

Jared Lee Loughner, 22, has been taken into custody and is the prime suspect, but the Pima County Sheriff’s Dept. released a photo of a “person of interest” they’d like to talk to. The LA Times has more info on both Loughner and the “person of interest.

I wasn’t on a computer yesterday but Tweeted from my phone quite a bit – Twitter truly was the best place to get updated information on the situation as it developed. I watched a total of about 15 minutes of Shep Smith on Fox News but turned it off in disgust, because Shep Smith drives me crazy. Twitter once again turned out to be an invaluable tool and resource for those wanting the latest info on a major news event.

It goes without saying that we’re all glad the primary suspect is in custody. Hopefully the “person of interest” will be found soon and questioned. ALL involved should be prosecuted to the fullest extent of the law. There is absolutely NO place in this country for this type of ” response” to political disagreement. None. Because one of those murdered was a federal judge (Arizona Federal District Judge John McCarthy Roll), Loughner will most assuredly face the death penalty.

As was expected, President Obama and Congressional leaders from both parties issued statements strongly condemning the violence, the targeting of Rep. Giffords, the loss of innocent lives. No legislation will be voted on next week in the US House. Most political statements were measured; sadly, some were not – and sought immediately to blame Sarah Palin, the Tea Party, and the “climate of right wing vitriol” for the shootings. This didn’t just come from Democrat politicians but liberal pundits, prominent liberal bloggers, Tweeters, etc. Keep in mind that bodies of the dead were not even cold, the survivors had not even been transported to the hospital before the despicable blame game started happening. Of course, the most disgusting thing about yesterday was the senseless violence and killings, but running second were left wingers and their sickening displays of “never let a tragedy go to waste” mentality to try and marginalize their political opposition via broad brush condemnation. Celebrity nitwits like Jane Fonda were blaming Sarah Palin for the tragedy because of Palin’s “target map” she had on her PAC site targeting Democrat members of Congress for defeat. Interestingly enough, Fonda is the same woman who believes to this day that her posing with the enemy during the Vietnam war had no influence on opinions of the war at home, nor did it provide aid and comfort to the enemy (according to her). You really can’t make this up.

The media, of course, has gleefully jumped on the “blame the right” bandwagon. CNN, irresponsibly enough, leads the way with a headline on their website this morning that reads Giffords had history with Palin, Tea Party. This was pretty typical of yesterday’s and today’s Democrat talking points, and the innuendos flew (and continue to fly) from the mouths of irresponsible mainistream media journos across the country, including the Democrat Pima County (AZ) Sheriff, and the New York Times – which leads today with this headline: Bloodshed Puts New Focus on Vitriol in Politics. Whereas we were supposed to treat the Ft. Hood shootings as the product of a “lone” sicko – and where we were supposed to not blame an entire group of people for the act of one deranged lunatic, the opposite approach was taken by both the MSM, several Democrat politicos, and numerous left wing writers – with the Daily Kos leading the way. Predictable, but disturbing all the same.

Of course, once it became clear that some of the the suspect’s favorite books were the Communist Manifesto and Mein Kampf – hardly Tea Party-recommended reading, the “blame the right” game left wing pundits and bloggers played became the “how dare you blame us for the shootings of a lone wacko” game. See how all their games work? Sick.

Never underestimate the ability of the hard left to deceptively switch gears and hypocritically change tactics when their bluffs have been called. You will never see this tactic so blatantly and sickengly on display as when a politically-motivated violent attack happens. Because they have so little credibility themselves, they’re so eager to discredit their political opponents that they will use any underhanded tactic available, including rushing to condemn and set the narrative before knowing the facts, a tactic they frequently pin on the right when it comes to Islamofascistic terror attacks – this in spite of the fact that the right has a valid reason to condemn more than just a “lone wacko,” considering the thousands of deaths the “lone wacko’s” fellow comrades in arms have committed against innocents in the name of jihad over a period of decades, in contrast to the small number of acts of violence committed by left and right wing extremists here in America (I wrote about the left’s penchant for selective condemnation here).

I pray for a speedy recovery for all who survived yesterday’s attacks, even though in the case of Rep. Giffords, her head trauma means she will have a long and difficult road to recovery. On the other hand, I hope – but won’t hold my breath – that the far left will see the error of their ways in rushing to condemn politically motivated attacks before they know all the facts. As I noted yesterday on Twitter, this is what the “professional left” does: use an any means necessary approach to try and discredit the political opposition, to try and make their voices irrelevant in the national debate. As much as we’d like everyone to take the high road in the immediate aftermath of tragedies like what happened yesterday in the interest of respect for the victiims, the false accusations and insinuations being thrown out there by opportunistic, devious partisans deserve, no, DEMAND, a response from those being accused and blamed.

Phineas butts in: And consider this mine.

11 Responses to "Get well soon, Rep. Giffords. Left wing partisans? Get over yourselves!"