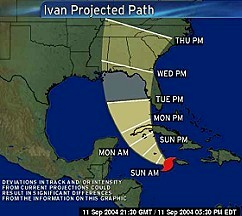 The southernmost tip of Florida thankfully looks like it’s going to be spared. Good news for my friends in southern FL, as they’ve been through enough this past month with Charley and Francis. However, if you look up at the top of the photo, where it says "Thu p.m." – just about a fourth of an inch to the "west" of that wording is yours truly. 😯 Hoping this thing will somehow die out at sea but that’s highly unlikely. Northern FL, AL, GA, TN, SC and NC look to be Ivan’s prime targets. The area I’m in hasn’t seen a hurricane of high magnitude since Hurricane Hugo . Many here were without power for over a month. My family was fortunate enough to have power restored back after two weeks. Here’s a brief write up of how it affected North Carolina:

In North Carolina, Hugo had a severe impact, both on the beaches of Brunswick County and in the cities and towns in the western portions of the state. Damage was reported in twenty-nine counties, most of which were designated as federal disaster areas. As the center of the storm rolled past Charlotte, wind gusts of over 85 mph buffeted the region. Trees crashed into homes, cars, and power lines, and utility poles snapped. Charlotte lost more than eighty thousand trees to the storm, many of which were more than seventy years old. Ninety-eight percent of the city’s residents lost power, and for some, repairs were not made for more than two weeks. Power outages caused large amounts of raw sewage to bypass treatment plants and flow into streams throughout Mecklenburg County. North Carolina’s largest metropolitan area was brought to its knees by the storm.