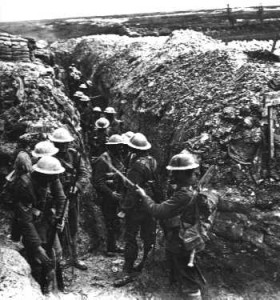 Today Germany makes the last payment on the debt imposed on her by the Treaty of Versailles, thus marking the end of the First World War after 92 years:

The final payment of £59.5 million, writes off the crippling debt that was the price for one world war and laid the foundations for another.

Most of the money goes to private individuals, pension funds and corporations holding debenture bonds as agreed under the Treaty of Versailles, where Germany was made to sign the ‘war guilt’ clause, accepting blame for the war.

Germany was forced to pay the reparations at the Treaty of Versailles in 1919 as compensation to the war-ravaged nations of Belgium and France and to pay the Allies some of the costs of waging what was then the bloodiest conflict in history, leaving nearly ten million soldiers dead.

The initial sum agreed upon for war damages in 1919 was 226 billion Reichsmarks, a sum later reduced to 132 billion, £22 billion at the time.

“On Sunday the last bill is due and the First World War finally, financially at least, terminates for Germany,” said Bild, the country’s biggest selling newspaper.

It can be reasonably argued that the crushing burden of the debt was a significant barrier to Germany becoming a stable democracy after the war. Indeed, Hitler made resentment of Versailles one of the centerpieces of his rise to power, and he ceased payments once he became Chancellor.

Of course, in my opinion, Versailles really didn’t end the shooting war: it merely created a long armistice, a timeout before the firing started again in 1939. Indeed, much of the 20th century was dominated by one long war , hot and cold, for control of Europe. Though the primary actors changed over time, the war that started in 1914 really didn’t end until the fall of the Soviet Union in 1991.

But, whether one considers the World War to have ended in 1918, 1919, 1991, or today, the great question that’s been asked since it began has been “Whose fault was it?” Who was responsible for the devastation and carnage? Some saw great impersonal forces at work as the Great Power system of the 19th century headed toward an inevitable crisis. Others point fingers here and there, desperate to find individual devils, or even blaming it on one ruler’s overcompensation for his withered arm.

In the end, I agree with David Fromkin’s conclusion in his “Europe’s Last Summer.” Seeing Germany at the apex of her power, from which she could only decline vis-a-vis France, Britain, and especially Russia, the Imperial German General Staff used the crisis created by the regional war between Austria-Hungary and Serbia to generalize it over the whole Continent in order to smash Germany’s rivals then and there and establish her as the unquestioned predominate power of Europe. Thanks to this one Pandora’s Box moment, the world suffered 37 million dead and wounded in World War I, the rise of totalitarianism, over 60 million dead in the second round from 1939-45, and the crushing of Eastern Europe under the Soviet heel in a decades-long Cold War that periodically threatened the world with nuclear devastation.

2 Responses to "Peace at last! World War I is over!"