Not surprising. The last thing the Religion of Misogyny can tolerate is a self-confident, independent woman who doesn’t dress like a shapeless lump: 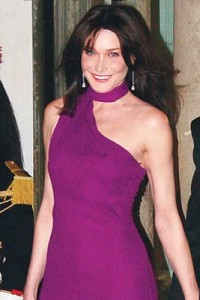 From Daily News and Analysis:

Security services believe President Nicolas Sarkozy’s wife is now “high up” on al-Qaeda’s hitlist of potential VIP victims in France, it was revealed.

Fears for Bruni’s safety come after Osama bin Laden issued a chilling personal threat to kill French citizens in revenge for France backing the war in Afghanistan and their new law banning the burqa.

The al-Qaeda terror chief released an audio tape last week warning, “It is a simple equation, if you kill, you will be killed.”

“Security has always been high around the First couple, but we have learned that it has now been heavily increased around Ms Bruni herself,” the Daily Mail quoted the website as saying.

“There is no question of her ever going out without an armed escort and details of all her movements are being kept secret until the very last moment.

It’s still a war, folks, and they’re still trying to kill us.

LINKS: My earlier posts on Islamic misogyny. And here’s a good book on the topic.

Via The Jawa Report.