Veterans of Baghdad or other Iraqi cities from just a few years ago might feel a disquieting sense of déjàs vu on reading this report:

“All-out fighting” was reported Friday afternoon in several areas of Matamoros, sources with knowledge of criminal activity there said.

Officials at the three international bridges in Brownsville said they were open as usual.

At approximately 5 p.m. gunmen began fighting each other along Calle Sexta, one of Matamoros’ main avenues, and also hijacked tractor-trailers and other large vehicles to block off main roads to keep the Mexican military away, stated a Mexican law enforcement official.

Heavy fighting was reported along Calle Sexta and Sendero Nacional. The fighting reportedly lasted more than two hours. The number of casualties was not available at press time Friday.

Chases between the Mexican navy and members of a criminal organization also were reported on the Avenida del Niño.

But that wasn’t Baghdad or Mosul or Baquba. It was in Matamoros, just over the border from Brownsville, Texas: 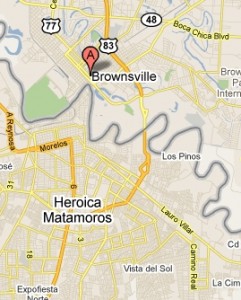 And this isn’t just an isolated incident in one torn up border city. Battles like these are taking place in towns all along the border, as cartels fight each other and the Mexican military — when the latter aren’t working for the cartels. Juarez at the other end of the border with Texas recently saw the massacre of 14 people in gangland hits on bars and nightclubs. The situation has grown so dangerous for residents that many are fleeing their homes and abandoning their farms, leading to wholesale depopulation in some places:

A violence-ridden stretch of Mexico’s border with the United States has become virtually deserted due to intimidation from violent drug cartels, which have killed hundreds in that area in recent years, scared away local law enforcement and forced countless businesses to close shop.

Northern Mexico’s Juarez Valley, a cotton-farming area located on the southern bank of the Rio Grande, has become increasingly desolate, with its three towns having lost between 30 percent and 45 percent of their residents since 2005, according to census figures.

The exodus is blamed on the ever-growing presence of the Juarez cartel, headed by Vicente Carrillo Fuentes, and the Sinaloa mob, led by Joaquin “El Chapo” (Shorty) Guzman, in that coveted drug corridor, where army patrols are intermittent and the occasional rumble of a late-model SUV carrying several heavily armed men is a stark reminder of who is in control.

According to some experts, the cartels want to empty the area completely to facilitate their drug-smuggling operations.

All of which is leading to an increasing number of refugees, both internal and those who flee north.

But it’s not a national security problem for us. Hey, people are still planning to go there by the thousands for spring break! What could go wrong?

I think I’d feel safer taking mine in Baghdad.

5 Responses to "Baghdad on the border?"