I’m all for odd and amusing public art, but not for $600,000 of federal taxpayer money:

Decried as wasteful spending that will be seen by just a couple thousand of daily workers who arrive on bus shuttles, foes have tried to delay the decision, expected tomorrow, April 1. But in an E-mail, an Army Corps of Engineers official said that the decision can’t be held up because it would impact completion of the huge project.

The City of Alexandria just announced that there are four works of art being considered and that a final decision needs to be made fast. The artwork was put on display for public comment from March 24 to today. The Alexandria News first reported the hasty announcement to decide a winner.

The schedule surprised some who thought that the costly artwork project was on the “back burner,” according to critic Donald Buch, a member of the mayor’s advisory committee overseeing the Mark Center project. “What’s the rush?” he asked.

What’s the rush?? Well, I tell you, mister: What red-blooded federal worker wouldn’t want to see a giant statue of a fairy riding a toad on their morning commute — with sound effects!

Your tax dollars at work: 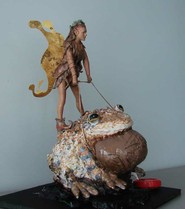 via The Jawa Report

2 Responses to "Presented in Evidence of our Eventual Doom: $600 grand for a gurgling toad"