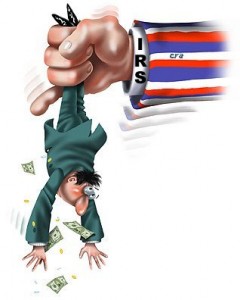 Here’s a question, the answer to which may just be a hearty “WTF?” Why does the IRS want to turn US banks into deputy tax collectors for foreign governments?

Under a proposed regulation, the Internal Revenue Service would order banks to report interest on deposits from foreign investors, not to the US government, but to the home government of the depositor.

What’s the problem, you ask? There are five, but I’ll list two here:

Dan Mitchell of the Cato Institute has produced a video that goes into these and three other reasons why this regulation shows the IRS is Stuck On Stupid:

This proposed regulation and the harm it will do have attracted the attention of Congress, who’ve reacted in bipartisan opposition to this dumb idea. For example, Senator Rubio said in a letter to President Obama:

At a time when unemployment remains high and economic growth is lagging, forcing banks to report interest paid to nonresident aliens would encourage the flight of capital overseas to jurisdictions without onerous reporting requirements, place unnecessary burdens on the American economy, put our financial system at a fundamental competitive disadvantage, and would restrict access to capital when our economy can least afford it. …I respectfully ask that Regulation 146097-09 be permanently withdrawn from consideration. This regulation would have a highly detrimental effect on our economy at a time when pro-growth measures are sorely needed.

You can read more reactions to this bureaucratic usurpation at Mitchell’s International Liberty, though I have no doubt the statists in the Congressional Progressive Caucus think it’s just peachy.

LINKS: Other posts on Leviathan government.

3 Responses to "Restraining Leviathan III: when the IRS goes wild"