Yesterday I chose Lyndon B. Johnson as my candidate for “Worst President of the 20th Century,” partly because of the problems and failures of his Great Society programs. On of those programs was the “War on Poverty,” meant to eliminate the scourge of want and deprivation from America.

From Dan Mitchell, this chart makes one ask if the war has been lost: 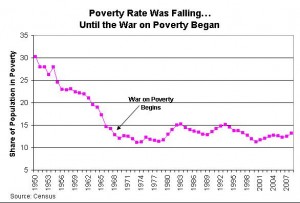 As one can see from the chart (larger version at the above link), poverty in America was in a steady and substantial decline until… government tried to cure poverty. Since then, there’s been no significant movement or net gain. Far from fighting poverty, it looks as if we’re spending billions to protect what poverty remains. If empirical evidence at all matters, then one can fairly argue that statist, interventionist, big-government solutions have been worse than useless.

Be sure to look at the rest of Mitchell’s post, which discusses the frequent distortion of the meaning of poverty by Leftists for political gain.

RELATED: Fausta presents an intriguing chart that puts “poor in America” in some perspective and links to an interesting Heritage study that questions whether poverty is a function of material want or of spirit.

4 Responses to "The War to Preserve Poverty"