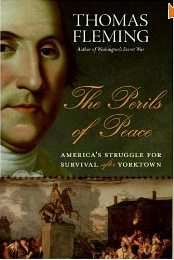 As the years go by, I more and more realize just how poorly History is taught in our schools, both at the secondary and the the collegiate level. As a case in point, take the end of the American Revolution. How many of us still believe what we were taught, that the war was won with the US victory over the British at the Siege of Yorktown in 1781 and that the 1783 Treaty of Paris was really just a formality?

Boy, have we got some un-learning to do.

Thomas Fleming’s The Perils of Peace: America’s struggle for survival after Yorktown (hereafter, “Perils”), tells the story of the post-Yorktown years: not only of the travails of the United States to turn de facto independence into internationally recognized reality, but also of the Great Powers that were part of the war, Britain, France, Spain, and the Netherlands, to end it before they all went broke. (We already were. See? History does repeat itself.)

Fleming tells this story as narrative history, relating events through the eyes and personalities of men often in conflict with each other and operating from motives ranging from noble and selfless to petty and base. The author makes it clear in his prose those whom he admires and respects and those for whom he has contempt. At the top of the list of the former are, probably not surprisingly, George Washington and Benjamin Franklin, who both not only had to carry on the military and diplomatic struggle with London, but often also had to battle generals and politicians on their own side. At the other end are characters clearly low in Fleming’s esteem, such as Continental Congress Delegate Arthur Lee, who for years waged a vindictive campaign to destroy Franklin and the French alliance. Even John Adams, a future president, was too often (in Fleming’s presentation) petty, vain, and jealous of any perceived slight to his honor, but who also in the end played an important role in the final treaty negotiations.

Fleming presents the European actors in a similar manner, though perhaps with less obvious biases. King George III, while adamant about holding the British Empire together and putting down the rebellious colonies, is treated with some sympathy and even a grudging admiration. Far from being the dolt of popular myth, he was a skilled political operator who was long able to dominate Parliament and came reasonably close to making that arrangement permanent. Indeed, Fleming often refers to George III as the “Patriot King,” and I don’t think he was writing that tongue-in-cheek.

There is also the key French player, not King Louis XVI, but his foreign minister, the Comte de Vergennes, who was determined to restore France’s position as the preeminent European power, which had been severely tarnished after her defeat at Britain’s hands in the Seven Years (French and Indian) War. Vergennes and Franklin formed a close alliance and even friendship, which lead not only to France’s recognition of American independence and her entry into the war, but loan after loan and gift after gift, which the Continental Congress would always burn through and then come asking for more, even after radicals in Congress would belittle and insult France.

Make no mistake, though; France was not doing this out of admiration for America, though that played its part through figures such as Lafayette, but out of  sense of self-interest in the great contests of European politics. And it was that “Great Game” that provided the catalyst for the final negotiations over the Treaty of Paris, as event as far away as Russia and Turkey and near as the emptying treasuries of France, Britain, and Philadelphia (where the Continental Congress sat)  impelled the Europeans and Americans to finally make peace.

In telling the story of the post-Yorktown years, Fleming weaves certain themes through his book. One is the role of the Atlantic Ocean itself, so vast that potentially critical information would reach the people who needed it only after weeks and months. Sometimes this would work in our favor, sometimes not.

There is also the nauseating fecklessness and factionalism of the Continental Congress, riven by ideology between what might be called the “practical politicians” (Madison, Hamilton, and others) and the “True Whigs,” a faction so caught up with ideology that they nearly wrecked our diplomacy in Europe and showed churlish ingratitude toward the Regulars of the Continental Army, even refusing to make good on back pay that was years overdue.

But don’t think the states were much better. Under the Articles of Confederation, even just one state saying “no” could block revenue-raising measures for the federal government. While that might sound appealing these days, it lead us to the edge of national bankruptcy and actual rebellion in the Army, when soldiers demanding their pay marched on Congress. (Leading that body to bravely run away, skedaddling first to New Jersey and then to Maryland.) Individual states were mean-spirited even to the troops who had saved them from the British, as experienced by General Nathanael Greene’s forces in South Carolina and Georgia when they were refused the money to even buy anything other than rotting food.

Fleming’s goal in showing us the small-mindedness of both Congress and the states is not just to make us shake our heads in wonder that we survived at all, though it does that when one also considers British efforts after Yorktown to divide the states and entice some to rejoin the Empire, but it also sets the stage for one of the most important moments in our history, one that helped define our character and set the tone for civil-military relations to this day: General Washington’s retirement and surrender of his commission to Congress, refusing those who urged him to instead march on Congress and even become King of America. This moment, recalling the story of Cincinattus from the Roman Republic, might well have kept the new nation from falling apart in conflict and even civil war.

There’s much more, of course, from the heart-wrenching stories of the slaves who sought freedom with the British and the slave-owners in the southern states who so feared revolt that they refused to arm and free slaves for service in the Continental Army, even though manpower was desperately needed, to the Tories themselves, whom we often think of as traitors, but who really were loyal Englishmen, many of whom bet and lost all by siding with their King.

There was the savage violence of the guerrilla war between Rebels and Loyalists in both the south and in New Jersey, and the strange story of Vermont, whose founders essentially stole the land of Loyalist New Yorkers, fought hard against the British, yet who negotiated both with the Continental Congress and the British commander in Canada to see who could offer them the best deal. (And one can see why, since Governor Clinton of New York was demanding an army be sent to crush them.)

The Perils of Peace, at just over 300 pages, is a skillful telling of a history far too few of us are familiar with; it is a book that truly makes the reader marvel that we not only grew to be the wealthiest, most powerful nation on Earth, but that we survived our birth at all.

4 Responses to "Sunday Book Review: The Perils of Peace"