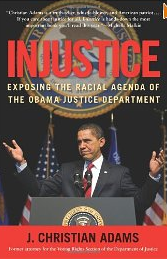 Fundamental to the American system of self-government is trust on the part of the public that votes will be counted fairly, elections will be run fairly, and the laws protecting our right to vote will be applied equally to all. Absent that trust, the system cannot stand: a citizen’s vote will be seen as worthless, elections meaningless, and the law as a tool for oppression and tyranny. It’s the risk of the latter that J. Christian Adams, a former career attorney with the Voting Rights section of the Department of Justice’s Civil Rights Division, wants to warn us about.

In “Injustice: exposing the racial agenda of the Obama Justice Department,” Adams asserts that, for years, leftists and liberals in the Voting Rights Section allied with and coming from what he calls the “racial grievance industry” have resisted enforcing the provisions of the Voting Rights Act when the victims are White and the oppressors are Black. To these attorneys, civil rights laws were meant to protect Blacks and other “national racial minorities,” not White voters. When Black and other groups corrupt an election, that’s merely “payback” for decades or even centuries of oppression by Whites — indeed, some lawyers of the Civil Rights Division feel they should facilitate this.

As Adams tells it, the problem goes back at least into the Clinton administration and becomes more of a problem under Democrats because they are generally allied to and supported by the various groups comprising the racial grievance industry, such as the NAACP and ACLU, among others. Under the Republican administration of George W. Bush, and contrary to the charges of “politicization” screamed by the Left, the political appointees at the DoJ who oversaw the career attorneys would either block ridiculous, unjustified legal action or force reluctant left-liberal lawyers to enforce the law in a race-neutral manner. They also made sure to hire attorneys of all political backgrounds — conservative, liberal, and non-political.

This all changed with the coming of Barack Obama and his Attorney General, Eric Holder: no conservatives have been hired since 2009, even though the Division has been greatly expanded. Indeed, left-liberal civil rights activism became a prerequisite even to be hired at the Civil Rights Division, and new attorneys were regularly hired from leftist advocacy groups. Leftist career attorneys were promoted to supervisory political appointments that gave them the power to set policy. Instead of political appointees being a brake on the racialist instincts of the career attorneys, they became their facilitators and enablers. As one leftist attorney told Adams when asked why he opposed suing in an obvious case of intimidation by radical Blacks directed toward White voters, “I didn’t come here to sue Blacks.”

Adams illustrates his charges of ethical corruption at the Civil Rights Division with specific examples. Among them:

And there are many others, including shocking examples of unprofessional conduct, some of which has resulted in hundreds of thousands of dollars in fines against DoJ attorneys.

Adams concludes with a chapter of recommendations to reform the Department of Justice, some as simple as a ban on political activity by DoJ staff (a limited one had been in place, but it was regularly ignored by leftist attorneys from 2008 on), others as radical as breaking up the Civil Rights Division and distributing its duties among other departments that could ensure professional, race-neutral conduct. While not all DoJ/CRD lawyers engage in racialist behavior, Adams makes it clear the problem is widespread and only massive reform will fix things. Naturally, we can’t expect these to be acted on by President Obama and AG Holder; if it is to happen at all, it will have to be under a future Republican administration.

“Injustice” is an important book, one that exposes how far the Civil Rights Division has gone from being a neutral enforcer of the law, to being a partisan of a racial spoils system that misuses the Civil Rights and Voting Rights acts to pursue a racialist, radical leftist agenda. And he leaves us with a reminder and a warning: these same people will be supervising the 2012 elections.

As Adams writes, it’s up to us to keep our eyes open and call-out corrupt behavior whenever and wherever we see it, and to make sure real reformers come to power in 2013.

Summary: Highly recommended, appalling yet essential reading, but be prepared to get angry.

RELATED: Adams has also written about the DoJ’s, I kid you not, “secret internal redistricting plans to try to force states, counties and cities to maximize the number of black elected officials resulting from redistricting” — meet “Max Black.” He writes often for PJMedia and also blogs at the Election Law Center. If you have any concern at all for the integrity of our electoral system, you should put him on your reading list.

One Response to "Sunday Book Review: Injustice — exposing the racial agenda of the Obama Justice Department"