I wrote in the last post of how Lincoln, in his Gettysburg address, captured the essence of American exceptionalism in the ideology of liberty that ties this nation together and makes it so different from almost any other place on Earth.

Well, coincidentally the Pew Research Center published the results of a survey examining the views of Americans and West Europeans on the role of the State and the individual. I think you’ll find the results interesting: 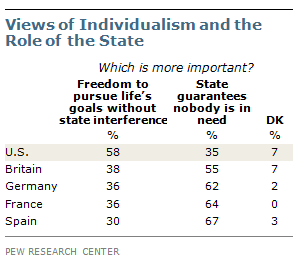 The difference is stark, wouldn’t you agree? Forget the Continent, where statism rather than liberty has been the rule and where the “Anglo-American system” (i.e., classical liberalism) is often held up as a bogeyman, but we’re almost polar opposites from our British cousins, from whom we inherited almost our whole political tradition.

And we’re seeing that play out in our national political drama, as time and again the majority of Americans have opposed the vast expansion of the federal government under Obama. When a truly large demonstrations took place here, it was against massive federal borrowing and the expansion of the state via ObamaCare. When people took to the streets in Europe, for example in France when the government proposed mild entitlement reforms, it was to demand an even bigger state and more “free stuff.”

The percentage preferring liberty to being coddled by the government is too low for my tastes, but it’s still a hopeful sign that we can largely avoid going down the same drain as the EU.

It also shows, in this case via social science rather than oratory, just how unusual we are.

5 Responses to "Why America is exceptional, a graphic example"