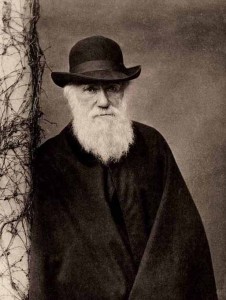 Got nothing political today (not even a good bit of Biden mockery!) but here’s a neat find for fans of science and history: hundreds of glass slides containing original fossil samples collected by Darwin during his famous voyages.

What Falcon-Lang found, while looking through the old drawers with a flash light, was a collection of 314 slides of specimens by Charles Darwin and his close professional colleagues, including the famous botanist Joseph Hooker and Rev. John Henslow.

Falcon-Lang said he was very surprised and excited to find “quite important and overlooked specimens.” AP reports Falcon-Lang described the moment of seeing Darwin’s signature on the first slide he examined as “a heart in your mouth situation.” The first glass slide was a specimen Darwin acquired during his voyage on the HMS Beagle. Falcon-Lang commented: “To find a treasure trove of lost Darwin specimens from the Beagle voyage is just extraordinary…We can see there’s more to learn. There are a lot of very, very significant fossils in there that we didn’t know existed.”

According to the Paleontologist, some of the significant finds come from the slides Hooker collected in 1846 while working at the British Geological Survey. One was a specimen of prototaxites, a 400 million-year-old tree-sized fungi that grew at a “time the Earth was so hot that not even the Poles had ice.” (1) Other finds, according to Daily Mail, include 40 million-year-old plants from a remote Island off the coast of Chile. Falcon-Lang said,”There are 100 million-year-old fossil trees from the latter age of the dinosaurs. It’s real Jules Verne stuff, and scientists are only now starting to study it and understand its scientific importance.”

I think this kind of stuff is cool: lost treasures, sitting in a closet or cabinet in a nearly forgotten room until someone stumbles across them. Thank goodness they weren’t chucked out by some overzealous janitor or administrator desperate for space.

RELATED: The Daily Mail has some pictures.

Footnote:
(1) I couldn’t resist highlighting this bit for the global-warming cultists in the crowd. So, the earth was much hotter, the Poles were clear of ice, yet life somehow survived this sweltering greenhouse. Indeed, it prospered. Now there’s “an inconvenient truth” for you.