The only reasons I can think of for voting to reelect this miserable Socialist failure are:

Forget Obama’s disastrous energy policies that will beggar the poor and the middle classes; forget his topsy-turvy foreign policy that slaps friends, hugs enemies, and makes the world a more dangerous place; forget his arrogance and his contempt for the Constitution, adherence to which is at the heart of our common bargain.

And forget that you’re unhappy with the Massachusetts Moderate, the Angry Muffin, or Mr. Sweater Vest, based on what they might do in office.

Looking at the numbers above, which represent the president’s record, tell me how could any rational voter who cares about the fate of the United States of America and, indeed, the future of the world make a positive case to vote to reelect Barack Obama?

UPDATE: And here’s a nice graphic courtesy of Pirate’s Cove that further illustrates the point: 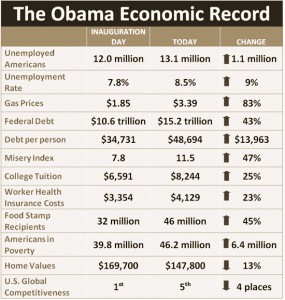 (Click the Pirate’s Cove link for the full-sized version.)

Footnote:
(1) Yeah, a Republican-controlled committee. So what? Statistics can be manipulated. And? Show me how those numbers are wrong.
(2) Who tried to unseat “Red” Jan Schakowsky in 2010 and is considering running again. Go, Joel!

7 Responses to "Tell me again why you’d vote to reelect Obama?"