This is the fruit of the intellectual handiwork done by President Obama’s Harvard mentor, Derrick Bell: 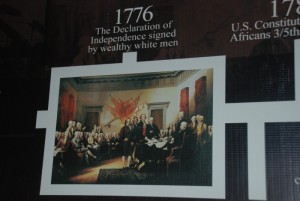 (For a larger version)

And here’s the explanation:

The nation’s premiere voting rights museum—the National Voting Rights Museum—now sits at the foot of the bridge [in Selma, Alabama]. The museum is an inadvertent monument to the civil rights movement’s degeneration. Its outlook is neatly captured in ten words that begin its timeline display of the civil rights movement. There, we find a replica of John Trumball’s iconic depiction of the signing of the Declaration of Independence with the caption, “1776. The Declaration of Independence signed by wealthy white men.”

The original civil rights giants would never have tolerated this historically false assertion. They were patriots, driven by love for their fellow countrymen and a burning desire to make America a better place for all its citizens. They repeatedly and vehemently rejected hatred. But the nasty caption captures the bitter spirit of much of the civil rights movement today and of numerous race-based activist groups around the country.

According to Bell’s Critical Race Theory, which not only the president, but several members of his administration and the Supreme Court and the media admire, the structure and philosophy of the United States is inherently, irrevocably racist. Hence, the caption to Trumball’s famous painting.

It’s hard for me to describe how offensive I find that, let alone dead wrong.

So I’ll let you discuss it.

RELATED: What is the Pacific Educational Group?