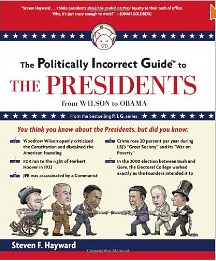 How do we evaluate our presidents? What criteria do we use to say which are great and which are bad? If you’ve grown up in the postwar American school system, that question has been answered for you. The great presidents (1) are those who were “leaders,” who saw the Constitution as a living document that could be reinterpreted to meet “the needs of the times, and who chafed at the built-in constitutional limitations on government’s power, which kept the president from enacting “needed” reforms. Bad or weak presidents were those who respected the constitutional limits and didn’t follow an interventionist domestic policy. Thus, FDR was “great,” while Calvin Coolidge was “bad.”

But to stop there is to stay within the paradigm of the liberal-progressive historiography that’s dominated in our classrooms for the last half-century or so. Historian Steven Hayward, in his “The Politically Incorrect Guide to the Presidents from Wilson to Obama,” uses another standard: how well the president in question met the requirements of his oath of office:

With that as his starting point, Hayward looks at the conception of the presidency held by the Founders and the 19th-century presidents through McKinley (2): that the president is the Chief magistrate of the nation, there to execute the laws, defend the Constitution, and lead the military in time of war. He was not intended to be a leader or interpreter of the national will; that job was given to Congress as the elected center of our national life. Largely, they met that goal, though I would argue that Andrew Jackson, a charismatic man who often claimed to speak for the nation as a whole, previewed his 20th-century successors.

The key chapter is the next, wherein Hayward examines how Woodrow Wilson, who thought the Constitution was obsolete and held separation of powers in contempt, changed the role of the presidency to that of a “Leader” who interpreted the national will and took the nation where the currents of History were leading it — the “progress” in “progressivism.” Wilson was heavily influenced by the German philosopher Hegel, who was also heavily influential in European authoritarian movements, such as Socialism and Fascism. (This is one of the themes discussed more fully in Goldberg’s “Liberal Fascism,” which I highly recommend.) In order to get where he wanted America to go, Wilson had to somehow circumvent the limitations placed on the presidency and government overall by the Constitution, hence, as Hayward notes, Wilson’s development of the doctrine of the “living Constitution,’ something near and dear to liberals today.

With that base –the original role of the presidency and how Wilson changed it– Hayward then briefly examines the administrations of each man from Wilson to Obama. He reviews each for how they saw their role, how they dealt with challenges that arose, how they thought (if they thought) about the Constitution and the meaning of the Founding, and the significance of their Supreme Court appointments (for the “living Constitution” doctrine has turned the Supreme Court into an unending constitutional convention). At the end of each chapter, he assigns the president in question a letter grade reflecting how well he met his oath. I don’t think it’s spoiling anything to summarize the list here:

I’m sure readers can spot the pattern there: presidents who exceeded their constitutional authority, who failed to meet their duties, and/or who disgrace their office fare poorly. Those who show a high regard for our founding principles score well. Most fall in-between.

Like other books in the “Politically Incorrect Guide” (PIG) series, Hayward’s book is a brief overview, not a deep, detailed work. Its intent is to introduce to the reader to another way of looking at a question, a way that sharply and often controversially (3) varies from current orthodoxy — indeed, “politically incorrect.” While reading, sidebars inform the reader of interesting facts about each president, such as Harding being the coiner of the phrase “Founding Fathers,” and point one to “Books you shouldn’t read,” because they too are politically incorrect. So, even though the PIGs give just a brief survey of a topic, the reader comes away with a good reading list for further exploration.

Hayward’s style is very easy to read: straightforward, flowing, witty, but never superficial. While I don’t agree with him wholly in some cases, or at least have some reservations (4), he makes his case well and provides ammunition to conservatives looking for intellectual and constitutional grounds on which to challenge the left-liberal paradigm.

Summary: An entertaining survey of the presidency over the last 100 years that is at the same time thought-provoking and informative. Highly recommended.

Footnotes:
(1) Some grudgingly include Reagan, even though they hate his politics, because his accomplishments just can’t be ignored.
(2) TR, one of my favorite presidents, is a transitional figure. And, I have to admit, he did go off a bit of a cliff at the end of his life with his “New Nationalism.”
(3) Don’t believe me? Try telling a committed liberal that the New Deal was an objective failure.
(4) His argument about what really caused Nixon’s fall is new to me, and I’m not wholly sold.

4 Responses to "Sunday Book Review: The Politically Incorrect Guide to the Presidents from Wilson to Obama"