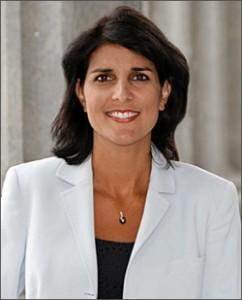 A couple of days ago, I wrote about allegations that South Carolina Governor Nikki Haley would soon be indicted on federal tax charges. I also speculated at length that the source was cheap, dirty, Chicago-style politics originating at the White House.

I’m happy to say I was wrong on both counts. First, from The Daily Caller:

South Carolina Gov. Nikki Haley says she’s being smeared once again by another blogger posting “lies” and spreading “trash” about her online.

“Sorry fellas,” Haley wrote on her Facebook page Thursday. “I’m not going anywhere no matter how many lies you put on a blog.”

Haley’s comments are in response to a report by The Palmetto Public Record, a South Carolina political blog, that she could be indicted in a federal investigation soon. She has denounced the post as totally false.

The blog said she could be indicted in federal court over the finances of the Sikh Religious Society of South Carolina, a worship center her family is involved with, “as early as this week.”

In an interview with TheDC on Friday, Tim Pearson, Haley’s chief of staff, elaborated by saying that the indictment rumors can’t be true because federal authorities haven’t contacted Haley about an investigation. He also told TheDC that Haley has not received any sort of target letter that would be typical of such a federal investigation.

“No one has asked to sit down with her and interview her,” Pearson continued. “There’s been no contact because the investigation doesn’t exist. You can’t have an indictment without an investigation. So all of this stuff is just totally false.”

He also added that federal authorities have not contacted Haley’s parents, either.

In the interview with a South Carolina newspaper, Haley said she had never done any accounting work for the Sikh center, which would kind of make tying her to accounting fraud a bit difficult.

ABC News has learned that the Internal Revenue Service never conducted an investigation into South Carolina Governor Nikki Haley’s involvement in a Sikh temple’s finances. Nanette Downing, Director of EO Examinations, stated in the letter, “…we did not conduct an examination for the above period (tax year ended 2009)”.

Eric Hill, a program manager at the IRS, said in a separate letter to Haley’s chief of staff Tim Pearson that “we determined an examination was not warranted at that time.”

Click through to the article to see an interview with Haley.

In other words, this is just another example of the gutter that is South Carolina Republican politics and an old-boys’ network that cannot tolerate an outsider breaking in.

As to the other point that I was apparently wrong about, that the IRS investigation was something cooked up by the Obama administration to derail Haley’s chances at national politics? Guess what? I don’t regret a word.

While I do regret contributing in any small way to the impression that Haley might be corrupt, I stand by my low opinion of the low character of those running the government in DC right now. Had there been a federal investigation, and given the deep influence of the “Chicago Way” on the president and his advisers, the assumption of a political hit-job would have been perfectly reasonable.

13 Responses to "No Haley investigation, or, South Carolina politics stink"