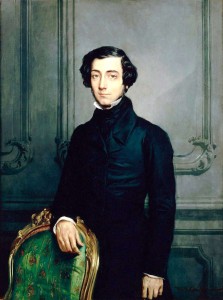 My friend Michael Ledeen has a great essay at PJMedia arguing that Obama’s shocking remarks about the Supreme Court and his apparent questioning of judicial review the other day had nothing really to do with the Constitution, since it was all just politics to him, as his walk-back the next day and Eric Holder’s essay for 5th Circuit Court of Appeals showed.

What it was really about, Michael says, was power. Power and freedom:

Power, because the president and his people think that, since they are smarter and better than the rest of us, anyone who tries to limit their power is bad, and has to be brought into line. Thus, the tough words of warning to any justice contemplating voting against Obamacare.

Freedom, because the accumulation of power in the hands of the executive branch comes at our expense, bit by bit and law by law, precisely as Alexis de Tocqueville feared.

I’ll leave you to read the rest of Ledeen’s essay; it’s worth your time. But I must repeat his quote of de Tocqueville:

That power is absolute, minute, regular, provident and mild. It would be like the authority of a parent if, like that authority, its object was to prepare men for manhood; but it seeks, on the contrary, to keep them in perpetual childhood: it is well content that the people should rejoice, provided they think of nothing but rejoicing. For their happiness such a government willingly labors, but it chooses to be the sole agent and the only arbiter of that happiness; it provides for their security, foresees and supplies their necessities, facilitates their pleasures, manages their principal concerns, directs their industry, regulates the descent of property, and subdivides their inheritances: what remains, but to spare them all the care of thinking and all the trouble of living?

RELATED: I know I push this a lot, folks, but Goldberg’s “Liberal Fascism” really does clarify so much. Remember, fascism won’t come with jackboots and rifle butts, but with a reassuring smile and a warm, comforting embrace.

7 Responses to "De Tocqueville foresaw Obama and the Progressive State"