The Obama campaign, including their allies in the media, have tried their best to make Mitt Romney’s time at turnaround investment company Bain Capital a negative for him, portraying him as a heartless, greedy capitalist. (1)

The IBD’s Michael Ramirez parries those attacks with one simple cartoon that compare Romney’s record as a CEO to Obama’s as president: 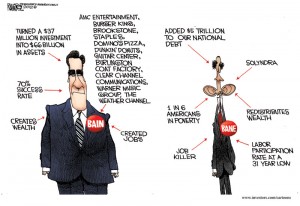 As they say, ’nuff said.

And be sure to check out Michael’s archive at IBD; he’s the best conservative political cartoonist in the business these days and one of the best, ever.

Footnote:
(1) Sadly, some Republicans helped give them ammunition. And let’s not speak of Obama’s corporate donors and the rewards they get; that would be racist.

2 Responses to "Bain vs. Bane"